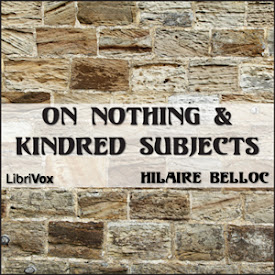 On Nothing & Kindred Subjects

“I knew a man once, Maurice, who was at Oxford for three years, and after that went down with no degree. At College, while his friends were seeking for Truth in funny brown German Philosophies, Sham Religions, stinking bottles and identical equations, he was lying on his back in Eynsham meadows thinking of Nothing, and got the Truth by this parallel road of his much more quickly than did they by theirs; for the asses are still seeking, mildly disputing, and, in a cultivated manner, following the gleam, so that they have become in their Donnish middle-age a nuisance and a pest; while he--that other--with the Truth very fast and firm at the end of a leather thong is dragging her sliding, whining and crouching on her four feet, dragging her reluctant through the world, even into the broad daylight where Truth most hates to be.”
- Hilaire Belloc (6 hr 3 min)

Section 02 On the Pleasure of Taking up One's Pen

Section 03 On Getting Respected in Inns and Hotels

Section 06 On a House

Section 07 On the Ilness of my Muse

Section 08 On a Dog and a Man Also

Section 11 On Railways and Things

Section 12 On Conversations in Trains

Section 13 On the Return of the Dead

Section 14 On the Approach of an Awful Doom

Section 15 On a Rich Man Who Suffered

Section 16 On the Child Who Died

Section 17 On a Lost Manuscript

Section 18 On a Man Who was Protected by Another Man

Section 21 On Jingoes In the Shape of a Warning Being

Section 23 On a Man and His Burden

Section 24 On a Fisherman and the Quest of Peace

Section 25 On a Hermit Whom I Knew

Section 26 On an Unknown Country

Section 27 On a Faery Castle

Section 28 On a Southern Harbour

Section 29 On a Young Man and an Older Man

Section 30 On the Departure of a Guest

Section 32 On Coming go an End