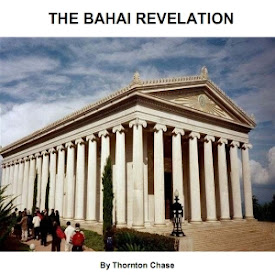 Thornton Chase is commonly recognized as the first convert to the Bahá’í Faith of Occidental background. During his life he organized many Bahá’í activities in Chicago and Los Angeles and was considered a prominent Bahá’í. In 1894, Chase met Ibrahim Kheiralla, a Bahá’í from Beirut who had recently come to the United States. Chase and a small group of Chicagoans began to study the Bahá’í Faith with him. By 1895 he had completed the class and become a Bahá’í. In 1907 Chase was able to go on pilgrimage. Though Chase was able to be with ‘Abdu’l-Bahá in Akka for only three days, the experience transformed him. ‘Abdu’l-Bahá, highly impressed by Chase’s qualities, conferred on him the title Thábit, "steadfast". On returning home, Chase wrote an account of his pilgrimage, which was published under the title In Galilee in 1908. The short work gives a detailed and poignant description of ‘Abdu’l-Bahá's home and family in Akka, as well as a moving description of ‘Abdu’l-Bahá himself. Chase then turned his thoughts to an introductory book on the Bahá’í Faith. Published as The Bahai Revelation in 1909, this work was one of the most comprehensive and accurate introductions to the Bahá’í Faith written by an early American Bahá’í. It continued to be reprinted until the 1920s. The work emphasized the Bahá’í Faith and its teachings as a vehicle for personal spiritual transformation. Shoghi Effendi, the Guardian of the Bahá’í Faith, later honoured him as one of the Disciples of ‘Abdu’l-Bahá (also termed “Heralds of the Covenant”). (Adapted from Wikipedia) (5 hr 55 min)

Such a profound compilation and a beautiful intro by Mr Chase. Read with great sincerity. Thank you for recording!

a khind and gentle book for spiritual growth and empowerment