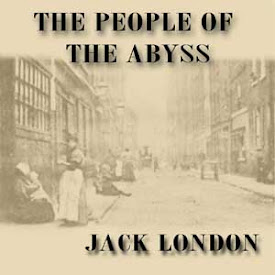 The People of the Abyss

Jack London lived for a time within the grim and grimy world of the East End of London, where half a million people scraped together hardly enough on which to survive. Even if they were able to work, they were paid only enough to allow them a pitiful existence. He grew to know and empathise with these forgotten (or ignored) people as he spoke with them and tasted the workhouse, life on the streets, ... and the food, which was cheap, barely nutritious, and foul.

He writes about his experiences in a fluid and narrative style, making it very clear what he thinks of the social structures which created the Abyss, and of the millionaires who live high on the labours of a people forced to live in squalor. "... The food this managing class eats, the wine it drinks, ... the fine clothes it wears, are challenged by eight million mouths which have never had enough to fill them, and by twice eight million bodies which have never been sufficiently clothed and housed."
(Summary by Peter Yearsley) (6 hr 28 min)

03 - Chapter Three - My Lodging and Some Others

06 - Chapter Six - Frying-Pan Alley and a Glimpse of Inferno

07 - Chapter Seven - A Winner of the Victoria Cross

08 - Chapter Eight - The Carter and the Carpenter

21 - Chapter Twenty One - The Precariousness of Life

24 - Chapter Twenty Four: A Vision of the Night

How much this mirrors the modern problems faced will alarm you and speak to the innate human system defects we have in society rit large.

This book could have been written today

This remarkable book is excellently read. For many, it is a story that comes from a benighted past. Sadly, London's story is as relevant today, if not more so. The lonely, sad, and hungry trek of the poor from one nasty waystation to the next goes on daily just outside. Wherever one is destitute and homeless, one will still encounter similar indignities in one's search for shelter and help-- ones that are tailored to beat one down and induce shame. The general personalities of those that administer charity have least changed. "Poverty pimps" they are called on the street. This class is indispensible to assuaging the consciences of the affluent and to keeping an emiserating system in place.

a moving look at poverty

do not read this book with a full pocket, you will be so moved by it you may find yourself buying food for the poor looking family at the store until you find yourself short on funds. an excellent reader. the story captivates you in the first few minutes of reading. to think of going to the slums as an adventure, i would never have thought of it that way. the chapters go on telling the life stories of many and the ending chapter are more about the statistics. its amazing how this writer, over a hundred years ago, was able to point out what the effects of moving business to cheaper labor forces in other countriez would be on the lives of those who didnt migrate after those jobs. and also on the costs of national debts going beyond dollars & not being worth that cost to make a country great in name if the people living there suffered & did not become great as well.

The People of the Abyss is a story about life in the East End of London in 1902. London wrote this first-hand account by living in the East End for several months, sometimes staying in workhouses or sleeping on the streets. The conditions he experienced and wrote about were the same as those endured by an estimated 500,000 of the contemporary London poor. A harrowing account of what poverty meant at the beginning of the 20th century! Peter Yearsley’s recording is well worth listening to. Very enjoyable, many thanks for your effort!

Brilliant reading from Yearsley as ever. Excellent, powerful, damning book. i can now male sense of London's famed legacy and influence on othwr social documentarist writers. For me it's filler of the gap between Engel's Condition of the Working Class and Orwell's Road to Wigan Pier. So dreadful the conditions the "great unwashed" had to endure. I hope the times do not slip back that way... Which they surely will if the current policies of taking back all our hard won freedoms are allowed to continue.

This should be required reading for students!

So much here that needs to be paid forward to our next generations. This in depth and brutally honest work about the 1.8 million poverty stricken East End residents of London at the turn of the 20th century is truly timeless in its lesson, and applicable to anytime and any country where there is hunger and homelessness.

This novel, at its surface, reveals the horrid societal inequality of 'that time in the past'. It also details the never-ending struggle to survive by means deliberately orchestrated by the owners of all that 'defined' the lives of the oppressed masses who were used as nothing more than disposable tools to further increase the power & wealth of said owners-of-all. I must note that the term "inequality" cannot begin to describe the abyss in which the masses were literally forced to exist. Nor can it describe the unimaginable horrors engulfing all who did exist within it. As for 'that time in the past', history does have an awful means of repeating its worst self. And this time around, in the 21st century (2017 to be exact), it does so with an orchestrated vengeance defined & controlled once again by said owners-of-all.

another great book from the london collection

well read great narration. how close is this history to our future. we have so many advances with time but we still share so much as the people from over a hundred years ago. we have poverty national debt . overcrowding slum landlords .are we so different to those in this book i wonder i really do . maybe in another hundred years someone will listen to our toils of modern day as we know it and try to compare there lives . just a thought james.