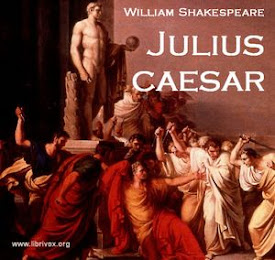 William Shakespeare's The Tragedy of Julius Caesar, based on true events, concerns the conspiracy against Julius Caesar, his assassination in 44 BC, and its immediate aftermath. Probably written in 1599 and among the first of Shakespeare's plays to be performed at the Globe Theater, Julius Caesar is one of his best-known dramas and has received innumerable performances throughout the centuries. (Summary by Laurie Anne Walden after Wikipedia)

First, the combination of voices may be a bit distracting. But what this reminded me of is that Imperial Rome was made up of myriad nationalities and tributaries. Accents would have been heard every day in this cosmopolitan city that was ancient Rome. This is a wonderful rendition reminiscent of community theater.

If you have tears...

While the idea of volunteering and producing a public domain recording is commendable and the efforts of most readers to be welcomed there is also a problem with quality. Unfortunately, most of this version is close to awful. It's almost entirely lacking any sense of drama or passion. Librivox does not want reviews or feedback for the fear of putting volunteers off. Understandably. But what is the point of then filling hyperspace with poor quality work? Who then gains from that? There are a few readers here who do a pretty good job, but some are so bad they kill the play and make the whole thing a lifeless drudge, the result too of having a mix-match of voices that include women/girls in male roles (in itself not a bad thing, but sometimes just adding to the cut and paste feel) and others whose native language is not English so that the accents are tasking. Really some kind of quality direction should be made with these volunteer recordings, however well-intentioned they may be. The idea of audio Shakespeare is really important, it makes the reading of the texts compeltely different, but should add to the drama and vitality of the work not take away from it!

First, let me just say thanks to everyone who put time and effort into this. Second, there is room for improvement. Antony (Barry Eads) read very clearly but with absolutely no connection to the text, no emotion, etc. Reading so mechanically made the flow a bit off and a bit easy to tune out accidentally. I don't want to be cruel but whatever speech issue Casca (mb) is dealing with is just a problem for dramatic Shakespeare readings. Hard to understand at times and distracts very much from the play itself to say the least. Thirdly, there were some FANTASTIC readers in this bunch. Brutus (Denny Sayers) and Cassius (Christopher Sanner) were absolutely perfect. They acted instead of just reading but they did it in such a way to help the words along, not overshadow them. Act IV Scene 2 where they are arguing in the tent is a dream for emotional connection to the play, the players and the history. The timing/ cutting was nearly seamless. Hats off to David Lawrence for that.

I had to read this for class and I love to supplement with listening to LibriVox. The only issue I had with this play was the man who read for Brutus had random pauses and his sentences were kind of choppy. Overall, well done.

It is a pretty good book. The readers are great. Brutus reads slow and choppy. It makes it easy to read with different voices, and more fun!! It is a little gruesome in a few places.All in all, great job!👍

It always amazes me to see people whine about...

...something they get for free. If you don't like it, then record your own version or pay for a commercial recording.

The guy who voiced Brutus, although sounded old, yet served complete justice to the dignity and gentleness of Brutus. Brilliant work by everyone. Thank you so much.

This production is a very good reading of the text. Some parts are difficult to hear however due to strong accents.