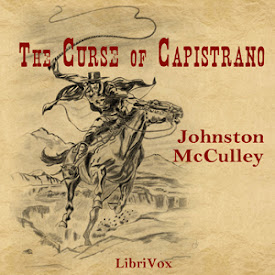 The Curse of Capistrano

The Curse of Capistrano by Johnston McCulley is the first work to feature the fictional character Zorro (zorro is the Spanish word for fox). The story was later republished under the name The Mark of Zorro. Senor Zorro is deemed an outlaw as he fights those in authority while seeking justice for the oppressed. He also woos and captures the heart of the lovely Senorita Lolita, but her father would see her married to the rich Don Diego Vega. Meanwhile, the ever persistent Sgt. Gonzales is closing in on our lovers and would means to see the end of Senor Zorro. (Summary by Barry Eads)

The Curse of Capistrano

I must begin by expressing thanks to Mr. Eads for reading this book. I got out of the reading habit several years ago as my cataracts formed and appreciate the efforts of people like you, even though my vision has been restored and could do it myself. If not for reading the comments of others about some of the Lirivox recordings done by some others. Yes, there are those who need to "proof read" before submitting their efforts but yours contain only such minor errors in pronunciation as to not cause lack of enjoyment. Please, the keep up the good work. As for a review of the story, I found myself envisioning all the movies and TV shows I've seen about "El Zorro" and how the original book is so much better. Only a single black and white movie from the 30's held close to the book. Any child (esp. boys) should love this story of a Robin Hood in black and the predecessor of characters like Batman.

Barry Eads does a great job reading this book. His Spanish and female voices could be a little better but those aren't a big deal. He offers a great reading. The book itself was fun and engaging though I found it to be underwhelming. Zorro often evades arrest with his pistol and by fleeing the scene, thus leaving the book bereft one of the main things I hoped it would have: swordplay. There was hardly any swashbuckling! If anything, in terms of how he handled dangerous situations, Zorro was more realistic than I wanted or expected him to be. I wanted adventurous, arcobatic fight scenes and more daring feats. I suppose as the first book, and in its original context, it must have been more thrilling, but with so many over-the-top iterations of the character and story being done since, I found this one to be very vanilla. It was fun to see where the whole thing has come from.

It's easy to see why this book became a blockbuster film; it's full of action, humor, romance, and plot twists. McCulley has a great sense of pacing, building up suspense and taking Zorro from scene to scene with great efficiency. Each short chapter ends with a mini-cliffhanger. Many of the supporting characters are one-dimensional, but I was happily surprised to find the main female character, Lolita, to be a self-reliant woman with a brain, rather than a damsel in distress.The Curse of Capastrano is a great short action-adventure book, perfect for putting a little pep in your morning commute or gym routine. For full review and other free audio fiction, see www.freelistens.blogspot.com

But the Spanish word "fray" - repeated many times in the book - is not pronounced "fray" but more like "fry", as in friar, which is what it means. And the sneering voice used for some of the villains sounded rather comical. But I'm just quibbling. Excellent reading of an excellent book! Barry Eads has done some other really excellent readings on Librivox, like Star Rover (aka The Jacket).

I never knew Zorro was a character from a book... happened to stumble across this the other day. Exciting story of a dashing caballero who defends the weak and opressed. Don Diego, the Sergeant, and the Captain are great comic relief. Barry's voices and some pronunciations are funny, and all in all he does a great job reading. You'll be dying to know who Zorro is if you don't know already.

One can hardly put it down... err, not stop listening. :) Lots of action, and a lot of fun. Reader was good, and the sound quality was excellent. I didn't care for the machine-modified voices for some of the characters, but they weren't modified to the point of frustration or disgust.

I am a Zorro fan and very much enjoyed listening. The reader must not live in California because he didn't have the Spanish pronunciation but he still did a good job for an enjoyable listen. (3 times now!) Thanks

so nice I listen to it twice!

excellent book. I've listened to this several times and each time I like it just as much as the time before maybe a little bit more five stars