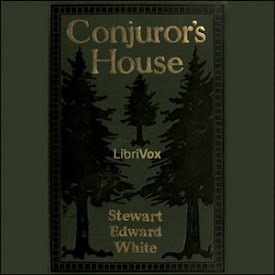 Conjuror's House, a Romance of the Free Forest

In the northern outreaches of the Canadian wilderness, it was understood that the Hudson Bay Company governed all trading, and one factor named Galen Albret took his position seriously. Free traders, or those who dared try to do their trading outside of the Company, found themselves having to face Galen Albret and his methods of dealing with them. One or two offenses he might tolerate, but for those who repeatedly refuse to acknowledge his warning out, he would send them on “La Longue Traverse” through the wilderness without supplies, and from which they seldom returned.

Ned Trent was one such free trader who defied both the Company and Galen Albret. The defining difference between Ned and the other free traders however, was his youth, energy, and good looks, which the Factor’s daughter did not fail to recognize. What follows the initial confrontations between Ned, Galen Albret, and his daughter Virginia makes for a thrilling tale of adventure, daring, survival, and romance.

Conjuror’s House was twice made into silent films titled “The Call of the North”, the first being Cecil B. DeMille’s first film in which he received solo directorial credit, and the second starring Noah Beery and Jack Holt (whose face was the basis for the face of Dick Tracy). (Summary by Roger Melin) (4 hr 32 min)

Brilliantly read by Roger Melin. Mr. Melin could read the phone directory and make you listen, I think. A good story. Definitely worth a listen. I must say that I'm glad that women have come a long way from the time this was written... no more helpless dependence on men. Still...those were definitely the days.

the story is short but actually quite well written there were a few parts in another language but I used context clues. the reader starts out monotone but I believe he is trying to mimic the dialect the characters would have had. all in all good read

Similar to the novels of James Oliver Curwood, but with several songs of the voyageurs in French, and more historical background. Good reading as usual by Roger Melin, although he didn't try to sing the French airs and ballads.

I enjoyed this story of Canadian trapping days. Of course the good always prevails, but that is the way I prefer my tales. Good reading. Nice length, shorter then some books, yet the story isn't cut short.

very good, but much too short to end. looking forward to book 2

conjures house, a romance of the free forest