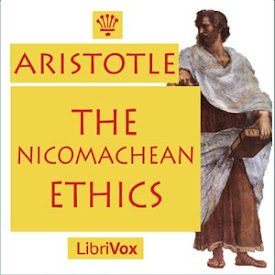 The work consists of ten books, originally separate scrolls, and is understood to be based on notes said to be from his lectures at the Lyceum which were either edited by or dedicated to Aristotle's son, Nicomachus. In many ways this work parallels the similar Eudemian Ethics, which has only eight books, and the two works can be fruitfully compared. Books V, VI, and VII of the Nicomachean Ethics are identical to Books IV, V, and VI of the Eudemian Ethics. Opinions about the relationship between the two works, for example which was written first, and which originally contained the three common books, is divided. Aristotle describes his ethical work as being different from his other kinds of study, because it is not just for the sake of contemplating what things are, but rather to actually become good ourselves. It is therefore practical rather than theoretical in the original Aristotelian senses of these terms. (Summary from Wikipedia) (10 hr 0 min)

The reader, as usual, is rather thorough and persists in tackling this large set of works. If only Aristotle were as thoughful...*coughs*blaming pica on sexuality*coughs*

The reader does not stress the sentences in a way to make it sound natural and thus clear. Some words are mispronounced.

I love his reading or got very much used to it :p

Pretty good, the reader sounds kinda like Kermit the frog 😂

Wow! The best self-help book everyone should read! Thank You, Geoffrey Edwards.