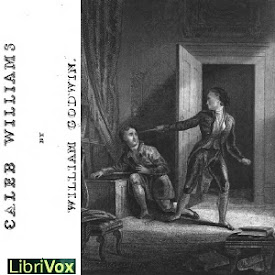 Caleb Williams or Things As They Are

The novel describes the downfall of Ferdinando Falkland, a British squire, and his attempts to ruin and destroy the life of Caleb Williams, a poor but ambitious young man that Falkland hires as his personal secretary. Caleb accidentally discovers a terrible secret in his master's past. Though Caleb promises to be bound to silence, Falkland, irrationally attached (in Godwin's view) to ideas of social status and inborn virtue, cannot bear that his servant should possibly have power over him, and sets out to use various means--unfair trials, imprisonment, pursuit, to make sure that the information of which Caleb is the bearer will never be revealed.
Godwin described the book as "a series of adventures of flight and pursuit; the fugitive in perpetual apprehension of being overwhelmed with the worst calamities", so that Caleb Williams can be classified as an early thriller or mystery novel. (Summary from Wikipedia) (16 hr 53 min)

Read at just the right pace, with a pleasant voice. The novel is interesting and entertaining. Some say it is the first detective novel. I would not call it one, though it does include criminals, victims, courts, and jails. Reminded me of Les Miserable and of Wilkie Collins' novel Basil. The novelist was Mary Shalley's father, I believe, though this is nothing like Frankenstein. It is a commentary on the classism and injustice of his day: tyranny is the word he uses over and over again. The more things change, the more things stay the same, and modern Americans (for example), will see many parallels to our day. It is also a story about how jealousy, paranoia, the desire for revenge, and the need to protect public image can consume a person. It's also about how victims sometimes become victimizers.

A very popular book in the late 18th century. Few people read it now. It's easy to see why. Very verbose by modern standards, and the proportion of narrative to dialogue is too lopsided for my tastes. Far too frequently, he tells you what to think about his characters, rather than showing them and letting you draw your own conclusions. Nevertheless, it is a surprisingly compelling narrative, with some truly eloquent speeches and arguments. Godwin is also an interesting and widely neglected philosopher, arguably the first utilitarian, although he never uses that word. I was reading it to get a better sense of his remarkable and complex ethical theory. It was definitely worth my time to read it. It might be worth yours, if your interests are similar to mine.

The reader did a perfect job. As about the novel itself, it is evident that the moral principles of Caleb are somewhat incomprehensible for modern readers as well as his veneration for Falkland. There were also many far-fetched plot turns, but towards the end it became more dynamic. The manner of writing is old-fashioned also, so be aware that this novel is a product of its time. Keeping this in mind, it is possible to listen to "Caleb Williams" with pleasure.

Long tale of intentional wrongdoings by an “upstanding” gentry towards an “innocent” but mentally equal “underling”. Exposes, on multiple levels, the inhuman treatment of prisoners in England during the time period. Ending is a bit unbelievable considering what had transpired over the recorded years. Vague, unsubstantial refers to faith-more a treatise on human failings and courage. Reader has good diction and does an acceptable job-especially for such a long book.