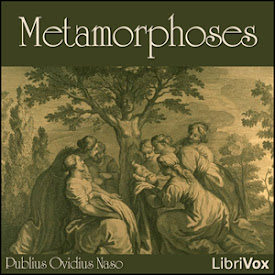 The Metamorphoses of Ovid is probably one of the best known, certainly one of the most influential works of the Ancient world. It consists of a narrative poem in fifteen books that describes the creation and history of the world through mythological tales, starting with a cosmogony and finishing with the deification of Julius Caesar. Published around 8 AD, the Metamorphoses are a source, sometimes the only source, for many of the most famous ancient myths, such as the stories of Daedalus and Icarus, Arachne or Narcisus.

Ovid works his way through his subject matter often in an apparently arbitrary fashion; however, the connection between all the seemingly unconnected stories is that all of them talk about transformation. Change as the only permanent aspect of nature is the certainty that underlies the work of Ovid, who jumps from one transformation tale to another, sometimes retelling what had come to be seen as central events in the world of Greek myths and sometimes straying in odd directions. The poem is often called a mock-epic. It is written in dactylic hexameter, the form of the great heroic and nationalistic epic poems, both those of the ancient tradition (the Iliad and Odyssey) and of Ovid's own day (the Aeneid). It begins with the ritual "invocation of the muse," and makes use of traditional epithets and circumlocutions. But instead of following and extolling the deeds of a human hero, it leaps from story to story sometimes in very cunning ways, and, because of the clever ways in which it connects the stories, the Metamorphoses were once called the "Thousand and One Nights of the Ancient World". (Summary adapted from Wikipedia by Leni) (14 hr 50 min)

Read by Kevin Were

At LibriVox, we can only record works that are in the Public Domain in the US. Later, and probably better, translations than the Brookes More version have been published since 1922, but these remain in copyright. EDITED 11 May 2014: We would welcome recordings of an alternative translation. We have a 'Book Suggestions' forum, and while it depends on volunteers coming forward, many suggestions are taken up sooner or later. A link in the post to a PD text always helps.

This was a fantastic reading for the most part. A few chapters were unlistenable and should be re-recorded. Wonderful text.

thanks to the readers for making this book available

I think this is the best book I have ever come across. I wanted to listen so I could understand European art better, at least to know the stories. But I could never have guessed the quality of the poetry. I think Brookes More deserves huge credit for rendering it into English. The rhetorical style is very assured, but there is nothing showy or forced, just this kind of economical brilliance. Ovid is brilliantly inventive and imaginative. He can for example find a hundred different ways to say someone was beautiful. Even if many of the stories are focused on a pair of lovers each one is unique. Then there is the narrative arc of the whole work from the creation of the land and ocean and heavens out of chaos through to the apotheosis of Caesar. Ovid conjures a magical world where god's, nymphs, animals, humans, streams, rocks, hills, forests, mountains and oceans are all interrelated and mutable. Some say it's not a serious work like the Iliad or Aeneid. But I prefer Ovid's stories to endless battle scenes.

If someone wants to take on a new recording...

...the Frank Justus Miller prose translation is far superior to this one and is available in the public domain through Archive.org. His translation was made for the Loeb Classics series. Still I think the LibriVox volunteers deserve thanks for taking the time to record any version of Ovid, even in an inferior translation.

Most of the readers did an an amazing job. In a few of the tracks their microphone is not picking up their voice very well. Otherwise great

The poetic translation is best.

Overseen by several great poets, the classic poetic translation is probably the one to go with.

A classic for everyone who loves greek/roman mythology. Although not all perfect most readers are good