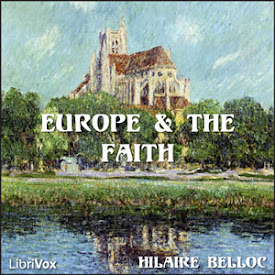 Europe and the Faith

The Catholic brings to history (when I say "history" in these pages I mean the history of Christendom) self-knowledge. As a man in the confessional accuses himself of what he knows to be true and what other people cannot judge, so a Catholic, talking of the united European civilization, when he blames it, blames it for motives and for acts which are his own. He himself could have done those things in person. He is not relatively right in his blame, he is absolutely right. As a man can testify to his own motive so can the Catholic testify to unjust, irrelevant, or ignorant conceptions of the European story; for he knows why and how it proceeded. Others, not Catholic, look upon the story of Europe externally as strangers. "They" have to deal with something which presents itself to them partially and disconnectedly, by its phenomena alone: "he" sees it all from its centre in its essence, and together. (Hilaire Belloc)

Solidly and meaningfully read, Europe and the Faith is a succinct, articulate and sweeping historical narrative written with confidence and an assurance springing from a vastly informed scholarship. Contemporary audio-readers may rue the sparsity of citation and academic reference, but Belloc's authoritative common sense is highly persuasive, moderate and reasonable. His assertion that "Europe is the faith and the faith is Europe appears, initially to be ethnocentrically narrow in a post-Benedict XVI era, but that Pontiff largely reaffirmed Belloc's assertion that without the faith, Europe will fail. This book offers perhaps the best "short" history of Europe from the zennith of the Roman Empire, through the dark ages and the flourishing of the middle ages into the shipwreck of the "Reformation" and the ensuing isolation of the human soul. Be assured, Belloc's tone is hopeful, passionate and indefatigable summoning good men of good will of his generation and ours to witness to a European and Catholic freedom.

This is one of those hidden gems that rarely sees the light of day. If you are Roman Catholic you are in for a special treat. You'll understand Europe in a new and clear way. The Faith defined Europe then as it does now. Only now it is a Europe wanting for its absence. The reader is especially talented and understands the specifics of what he is reading. And he narrates iwith a clear and understandable voice. It's an easy listen.

Belloc is amazingly lucid, almost prophetic, in his diagnosis of society's decline since the reformation. But that's just the last part of it. A classic work.

great book and a great reading of it