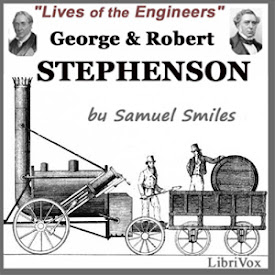 The reason why Stephenson was known as ‘The father of the steam locomotive’ was that he took a primitive, unreliable and wholly uneconomic device and turning it into an efficient machine not very different to those which ran until fifty or so years ago, married it with the iron rail and alone, and against considerable opposition,began, via the Stockton and Darlington Railway, the Liverpool and Manchester Railway and then the London and Birmingham Railway, the development of steam railways in England and the world.

George Stephenson began life in 1781 in the worst and poorest of all circumstances, he did not learn to read until he was twenty years old, but he, together with his son Robert, became the foremost engineers in the railway world.

If, in the middle years of the nineteenth century you wanted to build a railway, then, if you wanted it big bold and imaginative you might go to Mr. Brunel. If you wanted it to pay however, you would go to the Sephensons. (Summary by AJM) (12 hr 49 min)

Chapter 4 The Stephensons at Killingworth

Chapter 5 Early History of the Locomotive

Chapter 8 George Stephenson, Engineer of the Stockton and Darlington Railway

Chapter 12 Opening of the Liverpool and Manchester Railway

This is a very favorable and kind account of the lives of George and Robert Stephenson, focusing mostly on their engineering achievements. You get a bit of the personal life of George, but very little information about Robert beyond the railroad and bridge projects that he worked on. When I think back about how much life has changed since the introduction of the Apple II in the early '80s, it seems that life is moving soooo fast. But this story shows that ours is not the first generation to experience such rapid development. In telling the life story of George Stephenson, we go from carriage travel on mud tracks to dependable train service tying the entire nation together. The follow on development in related industries is striking. It is humorous now to hear all the dire predictions that were raised to stop the construction of rail lines - cows ceasing to give milk, birds dropping out of the sky, the extinction of the horse. As a bit of history, the book is quite interesting. Andy Minter is a great reader and makes even the statistical sections easy to listen to (although my retention of those facts is almost nil and might have created a stronger impression if I had seen the numbers rather than hearing them read to me).

Enjoyable for Biographers, Historians, and Engineers

Whether you're interested in biography, history, trains, or civil engineering, this will satisfy you. George's rise from unschooled engine stoker to a respected inventor and civil engineer is inspiring. The only quibble I have is the difficulty in picturing how long bridges and tunnels were when they're measured in yards. :) Andy Minter is among the best readers out there. He'll be greatly missed.

one of the best for railway into enthusiastic