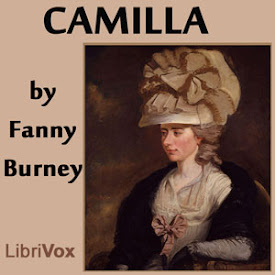 Camilla is Frances Burney's third novel. It became very popular upon its publication in 1796. Jane Austen referred to it, among other novels, in her novel Northanger Abbey:

“'And what are you reading, Miss — ?' 'Oh! It is only a novel!' replies the young lady, while she lays down her book with affected indifference, or momentary shame. 'It is only Cecilia, or Camilla, or Belinda'; or, in short, only some work in which the greatest powers of the mind are displayed, in which the most thorough knowledge of human nature, the happiest delineation of its varieties, the liveliest effusions of wit and humour, are conveyed to the world in the best–chosen language."

This is the story of Camilla, her beloved but selfish brother Lionel, her sisters Eugenia and Lavinia, and their extremely beautiful but thoughtless cousin Indiana on the months proceeding their marriages. Camilla is deeply in love with Edgar and he loves her back. However, on the advice of a friend, decides to make sure that she is free of fault. She has the luck to find herself in lot of uncomplimentary and comic situations which doesn't make Edgar's wish easy. Meanwhile, Camilla, on the advice of her father, is trying to make sure that Edgar really loves her before marrying him. Will they marry at the end? And will her sisters and cousin be happy? If you want to know the answers to these questions, and many more, please read the book. (Summary by Stav Nisser) (40 hr 5 min)

It kept me attentive despite occupying my hands with other things. Very interesting story, you never know what new scheme will be thought of by the uncle. Beautifully read! The ups and downs of life are skillfully shown in this entertaining book.

It’s a pretty good reading of Camilla. There is one reader who does crazy and annoying character voices and unfortunately recorded a lot of the chapters, which is the only reason I rated this version as only 3 stars. But the rest of the readers are good, especially Mr. Rolando. So if you can get through the crazy voice lady’s sections, it’s still worth listening to.

The book does a great job of flushing out a few characters as they go though life and get their just desserts. The thing takes several books to communicate a series of awkward misunderstandings. If liars had been honest and people just said how they felt, the book would have been a tenth of the size it is. I feel a bit cheated at the end with such a quick and tidy wrap up after hours of bearing through. All sorts of different readers that were mostly good while jarring the flow of having just one reader. Jane Austen should not have recommendeded this book.

I did enjoy it 😉 What an incredible contrast to the way we live now! I was easy to spot the influence of this story on Jane Austen. Lars (I hope I got his name right) was my favorite reader. Thank you!

The readers weren't all perfect, but I was surprisingly absorbed into the story. If you have some long drives to make, or a long shift at work, this book will get you through it.

Really engrossing though so very wrong. The heartache that Camilla suffered is beyond imagination; she loved in a way that is unreal. I suffered along with her and could not escape.

if you have time!