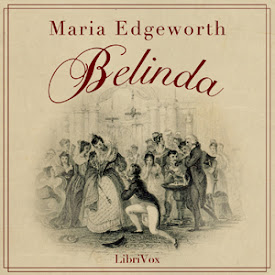 When Belinda was published in 1801, it became both controversial and popular. Controversial because of the inter-racial marriage presented in the novel, and popular because it's a very good comedy of manners, like Evelina by Fanny Burney. Belinda, like Evelina, is a soft and loving girl of 17, is coming to London with her aunt who directs her action in order to make sure that she'll find a good match. But what will happen if Belinda will fall in love? Will Clarence Hervey, the man she loves, be able to marry her? It seems almost impossible, as he is secretly bringing up another woman to be a perfect wife to him and now, in all honor, he thinks he must marry her.

These social novels about young women trying to find good husbands were admired by Jane Austen who referred to Belinda, among other novels, in her own novel Northanger Abbey: “'And what are you reading, Miss — ?' 'Oh! It is only a novel!' replies the young lady, while she lays down her book with affected indifference, or momentary shame. 'It is only Cecilia, or Camilla, or Belinda'; or, in short, only some work in which the greatest powers of the mind are displayed, in which the most thorough knowledge of human nature, the happiest delineation of its varieties, the liveliest effusions of wit and humour, are conveyed to the world in the best–chosen language." (Summary by Stav Nisser) (19 hr 35 min)

a short long novel of love

though this novel is long, i actually didnt notice and it felt just as short as anyother read. this book does not cover decades of time which makes most long reads FEEL long. this book covers a little over a year and does brief flashbacks to fill you in on characters history. this story is funny at times and sweet simple with love that almost seems star crossed. while the description states it touches on interracial marriage, this edition does not. the writer dropped the love story of juba and lucy in later copies - this is one of them. this is a "chick romance novel" though it has some interesting parts like ladies fighting a duel dressed as men, and a glowing ghost. the ending is just fabulously worded and the writer would have been a fun person to be around i think.

Serious advice: ignore bad-spirited comments about this work. These are delightful. I knew the obscure title I remembered from childhood bookshelves would be on LibriVox--and here it was (LOVE ME LOVE MY DOG). Excellent, thank you wonderful volunteers!! BTW, Sandra's readings may be especially welcome to those of us who find some narration too quick-paced to easily follow. It is very soothing and friendly, qualities that also make her an excellent choice for an audience of children.

Three stars. Our heroine's character is pretty one-dimensional. Where did she come from? Who was she before she was spirited off to the big city by her notorious match-maker aunt? What in her childhood instilled such inner strength and constancy? The story was entertaining but the ending was incomprehensible. Why was Belinda sidelined at the end with her reconciliation reduced to a second-person mention instead of highlighting her deliverance

This is a complicated, sophisticated tale and I have to wonder if it was drawn from some of ME's own experiences in life - so complex and real are some of the characters. It seems certain to me, after listening to this story, that Jane Austin read and, in an amusing way, drew, from time to time, from Maria Edgeworth's work.

This was an interesting tale with twists and turns and bits of humor that kept it interesting all the way to the end even though it was so long. One reader has a heavy accent so i had to be sure i had a quiet room while listening to his chapters. The readers did a great job.

The collection of readers was quite good. Especially Terry Mendoza. Maria Edgeworth's story was also quite good, although the ending seemed a bit rushed. Overall, I was impressed by the storytelling, which, thankfully, avoided the over-the-top humor and/or gothic elements so popular in its time.

Interesting. I was a little disappointed by the conclusion but found this an enjoyable tale.