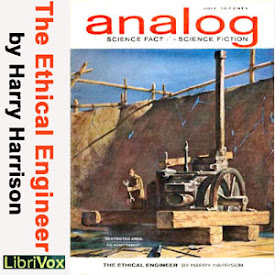 “The Ethical Engineer” also known as “Deathworld II” finds our hero Jason dinAlt captured to face justice for his crimes, but the ever-wily gambler crashes his transport on a primitive planet populated by clans that hoard knowledge. It’s a difficult situation for a guy who just wants to get back to Pyrrus. – The Ethical Engineer was first published in the July and August 1963 issues of Analog Science Fact & Fiction. (Summary by Gregg Margarite) (4 hr 9 min)

What a fun book. The best parts are always the hilarious ethical discussions between Jason and Mikah. But beyond these the story is still a wonderful romp on its own. It's an odd follow up to Deathworld because it's is so very different in tone. But I enjoyed it every bit as much as Deathworld. There are some truly laugh out loud moments between the characters. The reader is wonderful. He does a great job at getting Jason's sarcastic nature across. I highly recommend this to anyone who enjoys classic sci-fi, lite philosophical debates, and fun characters.

Gregg does another fine job, after listening to both this book and Deathworld, his voice is Jason.

Here's another good sci-fi and continuing adventures for our psi-hero, Jason Dinalt. Jason is captured by a man who says he is guilty of crimes and must die for those crimes. Jason, being the smart fellow he is, manages to trick the fellow and crash the ship on a strange planet. Both are captured by locals and turned into slaves. Jason sizes up the planet and its culture, and figures out how to get out of the mess. But for some odd reason he feels the need to save his foolish captor, who feels the need to thwart Jason at every turn! Can Jason figure out a way to get out of this mess and get back to his adopted Pyrrus? Will the Pyrrians get the chance to give the captor the thumping he so richly deserves? You will love this book, top to bottom. Gregg does a great job, as usual. Enjoy!

I really enjoy this author, he creates captivating sci fi worlds and is clearly quite intelligent. Another good read.

This book is a fast moving, never dull page turner. The hero is hunted by a "do gooder" who wants to "bring him in" for a trial and a first class hanging all in the name of what is right. Of course, the hero can't let himself be executed and so the ride begins. The story is lots of fun and never slow. The narrator does a very good job and has narrated a bunch of scifi books on Libivox. My only criticism (which really isn't one at all) is that his voice hits some very deep notes that make my car speakers rattle! Try the book.

The protagonist was endlessly arguing with a character who’s only purpose was to represent Christianity in the most absurd and warped way possible. A clumsy effort to argue that ethics can be separated from its religious foundations, but the problem has proved to be far more complicated than it seems. I don’t mind these issues being hashed out in stories, it’s actually a very good reason we tell and read stories. But if you have a strong and persuasive opinion put it up against your opponents best arguments. Poor form.

I really liked the story, and it was very well read. The reader did an excellent job with the voice of the main character. There is a lot of discussion about morality and ethics within the story, some of which you may not want your young child exposed to, or you may want to explain depending on your views. I would listen to the story before/with your child if you are worried about it.