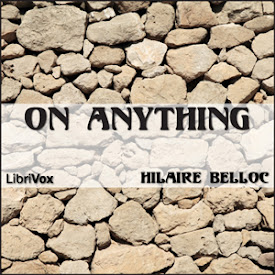 Long before I knew that the speech of men was misused by them and that they lied in the hearing of the gods perpetually, in those early days through which all men have passed, during which one believes what one is told, an old and crusty woman of great wealth, to whom I was describing what I intended to do with life (which in those days seemed to me of infinite duration), said to me, "You are building castles in Spain." I was too much in awe of this woman not on account of the wealth, but on account of the crust to go further into the matter, but it seemed to me a very foolish thing to say, for I had never been to Spain, and I had nothing wherewith to build a castle and indeed such a project had never passed through my head. -- Hilaire Belloc (7 hr 17 min)

On Building Castles in Spain

On the Simplicity of Words

On People in Books

On the Effect of Time

On the Air of the Dordogne

On the Sites of the Revolution

On a Secret Letter

On the Abstracted Man

On the Method of History

On History in Travel

On the Hungry Student

On the Brigand of Radicofani

On the Honest Man and the Devil

On the Candour of Maturity

On the New Road

On the Judgment of Robspierre