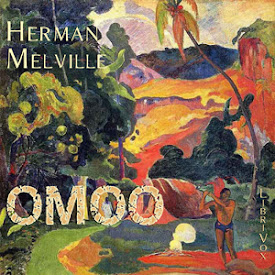 Omoo: A Narrative of Adventures in the South Seas

Omoo: A Narrative of Adventures in the South Seas is Herman Melville's sequel to Typee, and, as such, was also autobiographical. After leaving Nuku Hiva, the main character ships aboard a whaling vessel which makes its way to Tahiti, after which there is a mutiny and the majority of the crew are imprisoned on Tahiti. The book follows the actions of the narrator as he explores Tahiti and remarks on their customs and way of life.

Many sources incorrectly assert that Omoo is based on Melville's stay in the Marquesas. The novel is, in fact, exclusively based on his experiences in the Society Islands. (Summary by Wikipedia) (11 hr 30 min)

The voice inflections of the reader were most unusual and somewhat distracting. The only saving grace was the fact that Melville is such a tedious writer; thus, the strange reading was not fatal. However, I doubt that I will listen to another of her efforts. Despite all, the book was marginally informative.

not the right reader for this story. poor intonation and emphasis and hard to follow a woman trying to read as a rough sea captain. could not follow along and gave up at chapter 25.

I must give credit to the volunteer for her good intentions to read, Omoo. Her unusual inflection, lack of emotion and nasal like voice, were too distracting to read this book beyond chapter 1. Thank you, anyway.

It was good of the reader to make Melville’s Omoo available for reading by ear. But I found her vocal inflections and the timbre of her voice distracting. I do not recommend this recording.

Why you should enjoy Omoo

Herman Melville was a marvelous author. I encourage you to read this book. This book being somehow casually enthralling yet descriptive and adventurous. It was so dream-like but do not think it was fantasy. The books he wrote were entirely true, as an example the Typee valley is the Taipivai valley (Typee is a previous book). Each of

I enjoy listening to the narrator Tricia G. I've listened to many titles she's narrated and she's an acquired taste. Her voice becomes an interesting change and ultimately is easy to listen to.

Another awesome book by Herman Milville