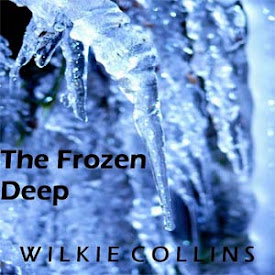 The Frozen Deep is a story of a love triangle between Clara, Frank and Richard, spiced up with dangerous expeditions, mysterious visions and life-threatening circumstances. The end is as surprising and unexpected as we are (or are not) accustomed to in Collins' books. (Summary by Diana Majlinger) (3 hr 5 min)

Your reading was excellent, you did everything right. I got really involved in the story and couldn't wait to find out what happened. And I'd never have heard of the book if it weren't for your reading. Thank you. The story manages to leave you wondering what exactly happened in the Arctic right up until the last chapter. Very suspenseful. And the characters are realistic, sympathetic and well rounded, so you really care what happens to them. Well worth a listen.

I liked this book

Summary pretty much covers it, boy falls for girl, leaves girl, girl falls for different boy and pledges to marry him. Returns first boy who is angry that she has chosen another and vows revenge. She is worried, more so when she realizes that the two are going on the same expedition to the arctic regions. Neat twist at the end. Recording quality is good, reader has a bit of an accent which makes it hard to understand her sometimes, but not so much that it detracts from the story.

The story left me in tears. The injustice of the poor man who devoted all his struggles to a woman who was unworthy of his affections. The reader had a clear voice but in some places the accent was too thick to understand. It was distracting that in middle of first chapter I tried looking for alternate version of the recording.

Inspired in part by the ill fated 1947 Arctic Expedition, this novella was developed from a play written by Wilkie Collins and Charles Dickens about an unrequited love triangle that apparently inspired the similar triangle in Tale of a Two Cities. Well paced, well read story that moves along quickly and comes to a rapid but satisfying, melodramatic resolution.

Maybe not Collins'best story, but still really nice, and nicely read. Although read with an accent, it is nicely read, without special effects or exaggeration in making different voices. A real pleasure to listen to! Thanks Dii :D

the end was so unexpectedly and refreshingly different than I had assumed. And I loved the reader and found her accent charming and her voice easy to listen to. I don't understand all the criticism she received so unfairly.

A fairly good story, but not up to his usual standard. It might be a good introduction for new readers who are frihtened away by the usually long books.

Good little short story from a master novelist and great reading; during his life time he and dickens performed this on stage up and down the country