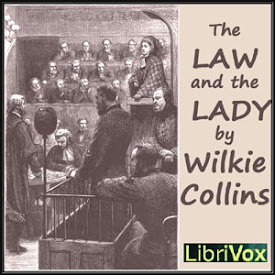 The Law and the Lady

Valeria Brinton marries Eustace Woodville despite objections from Woodville's family leading to disquiet for Valeria's own family and friends.

Just a few days after the wedding, various incidents lead Valeria to suspect her husband is hiding a dark secret in his past and she discovers that he has been using a false name. He refuses to discuss it leading them to curtail their honeymoon and return to London where Valeria learns that he was on trial for his first wife's murder by arsenic. He was tried in a Scottish court and the verdict was 'Not Proven' rather than 'not guilty' implying his guilt but without enough proof for a jury to convict him.

Valeria sets out to save their happiness by proving her husband innocent of the crime. In her quest, she comes across the disabled character Miserrimus Dexter, a fascinating but mentally unstable genius, and his devoted female cousin, Ariel. Dexter will prove crucial to uncovering the disturbing truth behind the mysterious death. (Introduction by Wikipedia) (13 hr 25 min)

On the Way Home

On the Way to the Major

The Friend of the Women

The Defeat of the Major

The Return to Life

The Story of the Trial. The Preliminaries

Second Question - Who poisoned Her?

Third Question - What was his Motive?

The Evidence for the Defense

The End of the Trial

I see my Way

My Mother-in-Law surprises me

More of my Obstinacy

The Indictment of Mrs. Beauly

The Defense of Mrs. Beauly

A Specimen of my Wisdom

A Specimen of my Folly

On the Journey back

On the Way to Dexter

Mr. Playmore in a new Character

What else could I do?

The last of the Story

Nice work by Wilkie Collins. The reader was fantastic throughout the book and made all (yes all) the characters feel real! Absolutely stunning performance when she read Eustace's first wife's letter. The reader's voice made me feel the despair of Sarah as if it was happening to me or someone dear to me, for i didn't like her at all until that. Eustace is my bias followed by Valeria. Dexter! Ah! What a character! He will make you feel a variety of emotions just like himself (yes! he's a chameleon). For me, it's all about extreme. When I liked him, I liked him extremely. When I hated him in end, i hated him extremely. He is a very underrated character in literature (He should be more famous than Mr.Darcy or Mr.Grey). Major Fitzdavid was a hilarious (maybe charming) character! Mr.Benjamin and Ariel reminded me of Mr.Watson (Sherlock Holmes). I neither liked nor disliked Mr.Playmore and Mrs.Macallan. All in all no one is really evil. Maybe Mr.Dexter is. Maybe he is not (poor Eustace). Go figure.

excellently written, a long story yes but not drawn out or uselessly slow at any point. All of the characters were unique and the reader did an awesome job voicing each of hem in an artful and convincing manner. This is my first read of Wilkie Collins, looking forward to reading other titles. A special thank you Wiebke for an incredible reading!

this book really goes in to test out a womans love for her husband. what would you do if your husband told you he was previously on trial for the murder of his first wife. an amazing mystery. i was led in so many different directions i. unraveling the mystery and i confess i had the correct answer at first and dismissed it as very improbable... but later as the killer is revealed and the circumstances unraveled - you realize why it makes since to be that person and i must say i am just held in awe by this writers patience to compose the story and not rush through in writing it. the reader mispronounced some words - repeatedly. but she really does a fantastic job with the reading! a must read for men and women!

Wow! I love Wilkie Collins. The depth and texture of his colorful characters never ceases to amaze me. I thoroughly enjoyed listening to this book. This was one of the best quality libravox recordings I've listened to. Wiebke is an excellent reader. She absolutely transported me with her wonderful, dramatic execution of the story. She read characters that professional actor might struggle to perfect, with perfection... which made her frequent, mispronounced words all the more difficult to overlook. I was jarred out of perfect imagination of the scenes while I pondered briefly what was that word she just said or giggled... (chpt. 14 - indictment became "in-dick-ment" again and again). And let's not forget to take "cor-age" (French accent). :) Nevertheless, this was thoroughly enjoyable! Fantastic book, excellent recording quality and nearly perfect reader.

The reader reads the story with great expression and a sense of humor. Her accent, although noticeable, is light enough that everything is perfectly understandable. Fair warning: the cruelty of one of the character can be a bit disturbing at times, and in my opinion the beginning of the story leads you to believe the narrator will be rather powerless, but hold out. She gets more interesting as the story develops. The plot turns out to be complicated & enjoyable, and minor characters add humor to lighten the serious subject. Overall, I loved this mystery.

You need to make better choices about who you fall in love with. That is really what this story is about, people who have made really bad decisions in their love interests and how it really screwed up their lives. The story is long but very well written. The character of Dexter was very vexing and he made me as impatient as he made Valeria. The narrator was fabulous and she really made Valeria real. Terrific story, highly recommended.

A very enjoyable “read.” Valeria is a wonderful character with an interesting cast supporting her in her quest to uncover the murderer is a 3- year old case. I commend this book to you. Additionally, the reader did a marvelous job. I often find it difficult, if not impossible, to understand readers with heavy accents. Not this time! She articulated each word clearly, not hurrying through the book and her British accent lent a degree of realism to the time and place of the story.

The story was thoroughly enjoyable, as was the reader's interpretation. She truly made the characters come to life. If there is one gripe I have, it's the many mispronounciations. Things like "Indictment" with zero silent letters might cause you to flinch, but the worst offense might be mispronouncing "Eustace." Since he is a main character, you'll have to endure or get used to it being pronounced like "mustache." P.S. For some undercurrent of misogyny, watch out for the "woman's tongue."