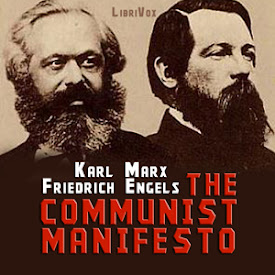 The Communist Manifesto was conceived as an outline of the basic beliefs of the Communist movement. The authors believed that the European Powers were universally afraid of the nascent movement, and were condemning as "communist," people or activities that did not actually conform to what the Communists believed. This Manifesto, then, became a manual for their beliefs.

In it we find Marx and Engel's rehearsal of the idea that Capital has stolen away the work of the artisan and peasant by building up factories to produce goods cheaply. The efficiency of Capital depends, then, on the wage laborers who staff the factories and how little they will accept in order to have work. This concentrates power and money in a Bourgeois class that profits from the disunity of workers (Proletarians), who only receive a subsistence wage.

If workers unite in a class struggle against the bourgeois, using riot and strikes as weapons, they will eventually overthrow the bourgeois and replace them as a ruling class. Communists further believe in and lay out a system of reforms to transform into a classless, stateless society, thus distinguishing themselves from various flavors of Socialism, which would be content to have workers remain the ruling class after the revolution.

The Manifesto caused a huge amount of discussion for its support for a forcible overthrow of the existing politics and society. (Summary by Mark F. Smith) (1 hr 27 min)

3 - Socialist & Communist Literature; 4 - Position of the Communists in Relatio…

Excellent Reading, Regardless of View

Regardless of whether you agree politically or not, this is an excellent reading of a historically significant text, which should be applauded.

An essential philosophical text for our time - whether or not one agrees with the content, Marx&Engels have been and remain one of the most influential social philosophical forces for the global economic north-west, in just about every sphere of life. And this recording is clear, well-modulated and a great listen. Interesting to hear it in a South Carolina accent, I dig it

Marx and his Ilk are like the most intelligent child you've known, reads more like a teens diary full of excuses for why they fail with no responsibility placed on oneself. Saying 'There will be peace once you do what I say under penalty of death', is not profound, it is psychotic. one sentence will contradict the next. it's actually kind of funny 😂 I've both read and listened to this manifesto dozens of times over the years. sounded much better when I was a teen. no wonder. 'we will get rid of the wealthy and powerful so then we will be the wealthy and powerful' .... ok 🤣 congrats, you've just created circular logic. the only things communism has ever created is itself and suffering and death

As an overview for this book The communist seek to disburse all wealth among all the people evenly, but the truth of what happens when you implement the communist system The enslavement of all classes but the politically powerful. This book by its very nature is confusing and manipulative seeking to twist the readers into alignment with the writers distractive and dysfunctional point Of View. For examples of how the communist system has failed completely look at USSR and Venezuela. The reader is very good.

How to be authoritarian larping as a fighter for social justice. The tenants of Marx and Engels are the foundation of most cults, and with such an emphasis on appealing to emotion over reason, why wouldn't they be? Morality and universal truths take a back seat to ideology and speculation, and in every single application the end results have proven to be devastating throughout the 20th century and in authoritarian societies all over the world.

Thank you Mark for sharing your excellent reading skills. This writing lead to the murder of 160,000,000 persons in the 20th century. It is a must read or listen for all persons hoping to understand Lenin Stalin Mao Pol Pot quest in bringing about the destruction of society.

What I want in a reading for stuff like this. Clear, steady voice. Not boring, not dramatic, but not robotic either. Communism is still the best way forward, and the Manifesto remains an excellent snapshot of the movement's early days.

well read I disagree with just about everything in it but. The points are interesting and I enjoyed the intellectual journey I had while listening to an idea that I disagree with.