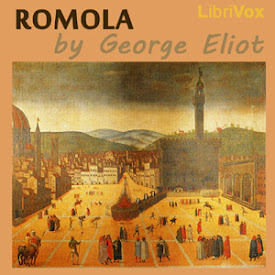 George Eliot's own favorite among her novels, this novel tells the story of Romola, the intelligent daughter of a blind scholar, who is falling in love with a man who is going to change her life and the politics of Florence in a way she doesn't like. Set in 15th century Florence, it is "a deep study of life in the city of Florence from an intellectual, artistic, religious, and social point of view". Summary by Stav Nisser and Wikipedia. (23 hr 11 min)

05 - The Blind Scholar and his Daughter

12 - The Prize is nearly grasped

34 - No Place for Repentance

35 - What Florence was thinking of

39 - A Supper in the Rucellai Gardens

49 - The Pyramid of Vanities

54 - The Evening and the Morning

On a positive notice, the readers of Romula are all quite good with no difficult accents or distracting mispronounciations. The negative for me is that Romula deals much more with Florentino politics and infighting than I found interesting. This is just my personal preference so don't let it deter you for giving it a try As usual, Eliot's writing is very insightful.

Other reviewers are right in saying it takes a while to get going. There isn't enough story for the length of time it took to tell it. I skipped almost-entire chapters for their rambling, & there is a lot of content that really doesn't bear on the story. Overall, I don't know why Eliot thought this book so great, although I think it could have been had it been more consise.