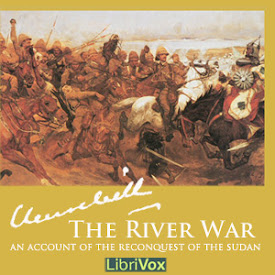 When the self-proclaimed Mahdi (“Guided One”) gathered Islamic forces and kicked the Anglo-Egyptians out of the Sudan, he unleashed a backlash. With the image of the heroic General Charles Gordon dying at Khartoum, the British public was ready to support a war to reclaim the lost territories. And when the political time was right, a British-Egyptian-Sudanese expedition led by the redoubtable Herbert Kitchener set out to do just that.

The river involved was the Nile. For millennia, its annual flood has made habitable a slender strip, though hundreds of miles of deserts, between its tributaries and its delta. Through this desolate region, man and beast struggled to supply the bare essentials of life. Though this same region, the expedition had to find and defeat an enemy several times larger than itself.

The young Churchill was hot to gain war experience to aid his career, and so he wangled a transfer to the 21st Lancers and participated in the last successful cavalry charge the world ever saw, in the climactic battle of Omdurman. He also had a position as war correspondent for the Morning Post, and on his return to England he used his notes to compose this book. (14 hr 13 min)

The Rebellion of the Mahdi, Part 1

The Rebellion of the Mahdi, Part 2

The Fate of the Envoy, Part 1

The Fate of the Envoy, Part 2

The Years of Preparation

The Beginning of the War

The Recovery of the Dongola Province

The Battle of the Atbara

The Operations of the First of September

The Battle of Omdurman, Part 1

The Battle of Omdurman, Part 2

The Fall of the City

On the Blue Nile

The End of the Khalifa

Very well read and a ripping and detailed account.

The very detailed descriptions of the terrain, the river, and the troop dispositions is overwhelming unless equipped with a map and model armies, and some may choose to follow the action in this way; nevertheless the quality of the writing and the excitement and anticipation engendered by what was essentially a live report makes it a real page turner. Churchill despised Islam and this shows in some of the passages in the book. In addition he describes how some of the enemy troops were prepared to commit suicide rather then surrender which was prophetic of the Islamist practices we see today.

Winston Churchill’s account is both detailed and compelling. The story is well told and draws the reader into the goals and struggles of both sides. The military and logistic details may seem a little over detailed, but as the story progresses the reader begins to appreciate how important these elements are especially in such unforgiving terrain. Well worth the listen. Also, the reader was excellent.

The reader has a good voice tone and reads at a steady pace. As the story is an interesting one, this book was a real pleasure to listen to. I had to force myself to bookmark a spot and pull away from this dramatic tale of late 19th century warfare and life in British colonial Africa.

The reading was good. but the chapters 1 to 12 have multiple copies in the on audio track. Would be 5 stars if that was fixed.

Very well read! Enjoyed the book by Churchill. Fascinating to listen to a description of that time, both military actions and society as it existed in 1889.

I wish we had an England and a Churchill to crush ISIS and all the bloody like of them.