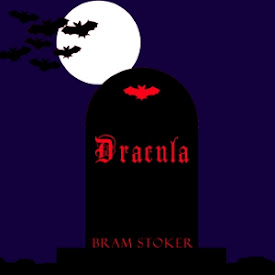 Bram Stoker did not invent the vampire story, but he popularized it with his classic 1897 novel. In form Dracula is an epistolary novel, told through a series of journal entries, letters, newspaper articles, and telegrams. It begins with lawyer Jonathan Harker's perilous journey to Castle Dracula in Transylvania, and chronicles the vampire's invasion of England, where he preys upon the lovely Lucy Westenra and Harker's fiancee, Mina. Harker and Mina join forces with lunatic asylum proprieter Dr. Seward, Lucy's fiance Arthur Holmwood, Texas man of action Quincey Morris, and Dutch vampire hunter Dr. Van Helsing to try and defeat their powerful adversary. (Summary by Elizabeth Klett)

My first experience listening books from librivox. I usually listen to dramatised books podcasts from radio programmes. On the podcast app I found Dracula and I loved it. The book itself is amazing and the readers where eager to give it all the dramatic tension it needed. The awkward way doctor Van Helnsing speaks is perfectly rendered in the audiobook! The level of the audio and the cleanliness of the recordings are very good points to the rating of this book. If I had to point out something that I didnât like much is the voice of MB sounds soft and gentle a little out of place in the words of a young professional man. But you get used to it and in the end it feels well amalgamated with the others. Itâs just the impact. I tried and listen to many other books but couldnât find such a dramatic flow of voices as in this one.

At first it was a bit hard for me to get into, might be because of the writing style and that English is not my first language. It gets frustrating sometimes when I'm struggling to understand, but I reckon some of the parts would be clearer if I have the text. Overall I enjoyed it very much and was grateful the volunteers read it so that I could persistently go on with the book.

Great performance by the readers. Elizabeth Klett does an absolutely astonishing work as Mina Harker. She makes even the boring parts enticing, and in the bits where a little more acting skills are required she knocks it out of the park. Denny Sayers is right behind her, excelent acting on him as well, which is good since this two have the characters with more booktime. I thought MB was a weird casting for Jonathan Harker at first, but it grows on you. The fella who plays Van Helsing is the only bad casting. I feel his voice does not match the character at all. Regarding the book, it's undeniably a classic and we'll worth the time. But, with that said, I feel that the story did not age too well. It starts out fine while Jonathan and Lucy are the focus, but afterwards it feels like nothing is happening for most of the time. For horror fans, still a must read, just don't expect a page turner.

A Very Good Attempt at a Very Tough Novel

I felt everyone did a great job. At first I want so sure about MB as Harker, but by the second chapter I felt he was perfect for it. Everyone did good for their part. I honestly think Dr. Seward was perfect. He provided a perfect break from the English accents, and Sayer's inflection and cadence was perfect for what it was to be. My only issue it's technical, as I would have wished the normalization to be better. But overall it was a very good job. Well Done.

I love the way the classic tail of Bram Stokers Dracula is told with each dairy, mem and note being told by individuals that to me was as realistic as anything I could have imagined while reading any of the books I own or seen on tv. I preferred to listen to the story while doing my house work or cooking rather then listening to music, which was my usual thing to do but after listening to Dracula I will be listening to my LibriVox app stories from now on.

A tale of Gothic Intrigue

Involving men with power and women. Stoker knows about story telling in fashioned letters. It is a thinly-veiled portrait of what the era is really like... scary best-sellerdom. As critic, I cheer for Mb portraying Jonathan, He did his best so far but I think he sounds more like the Dracula rather than Jonathan himself. And for Van Helsing, he is engrossing and clearly knows his field. For Rismyth, be more sound executive to be more like Van Helsing.

Without a doubt a classic! What a classic... I wonder when and why it hasn’t been banned...An excellent and theatric reading by the entire cast who personify each of the characters so languidly and lugubriously that one often doesn’t know whether to laugh, cry, or look over their shoulder in fright while listening to the accounts of the count who stole Lucy’s soul while driving his point so sweetly and yet sometimes so . . .

i didnt expect much but this book blew me away. it really was creepy and it was the best vampire inspired creation i think ive ever heard. i really enjoyed. much better than a lot of modern vampire interpretations. not saying i dont enjoy some of them but i just really likex this one.