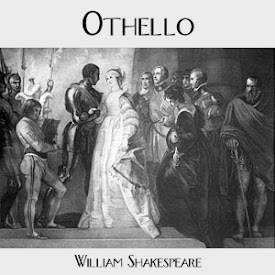 Othello is the story of a cross-cultural romance between the title character, a noble moor who is a general in the Venetian army, and Desdemona, a beautiful and virtuous Venetian lady. The newly-married couple fall prey to the machinations of Iago, Othello's jealous ensign, who plots to destroy their union. (Summary by Elizabeth Klett)

A classic. Most of the voice actors are great, though some of them need to get a decent microphone. Some of the audio quality is so low that you can't understand the words, and it takes you out of the story. Also, othello's voice is extremely loud compared to everyone else. Though I recognize this is all volunteer work, this is a simple fix in post production.

Well casted with unique and clear voices. The recording was uneven at times and Desdemona's voice takes some getting used to and Iago is slightly annoying but overall a good performance.

I ended up just reading Act I because so many of those parts were poorly done. Brabantio and Iago are very difficult to understand. The Turkish sailor is nearly impossible to hear because of the bad quality of the recording. Even the Duke of Venice is a little difficult to understand. The Herald in Act II, Scene 2 desperately needs to be rerecorded! The quality is so bad I couldn't understand a thing. I quite enjoyed Desdemona's accent but she was a bit quiet. Emilia really stole the show though. Her's was not only clear and a good quality recording but she also got into it and made Emilia come alive! Kudos!

Thanks but it’s quite poor

Rodrigo voice actor seems like he was forced to participate in this. Only Emilia actor was truly brilliant and Desdemona was good as well. Iago actor seems very sincere but he speaks through his nose and so weird inflection. Barbantio was horrible. anyway, it’s all volunteers so I can’t be all too high and mighty, so Thank You! Yet, other LibriVox entries have done much better than this one 😕

Iago's voice is irritating!! Othello's was the only clear one except that the gravel in his voice gets annoying after sometime. It was too long a script by shakespeare only to see very little happening....

pretty good, but too much variation in volume. and too many females reading male parts. it gets confusing. I still liked it