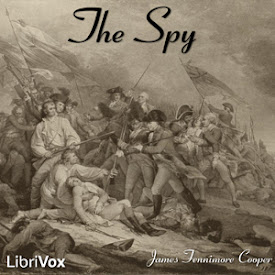 James Fenimore Cooper's second novel, The Spy (1821), is based on Sir Walter Scott's Waverly series, and tells an adventure tale about the American Revolution. The protagonist is Harvey Birch, a supposed loyalist who actually is a spy for George Washington, disguised as 'Mr Harper.' The book brought Cooper fame and wealth, and is regarded as the first great success in American fiction.
(Summary by Gord MacKenzie) (16 hr 44 min)

Read by Fox in the Stars

Too many readers, lost the context of the book as a result

waste of my time

this book has a terrible writing style way to hard to understand what is going on through most of the story >:(

I love James Fenimore Cooper; his style of writing suits me well. I think Sam Clemens was just a little jealous when he wrote that book about his errors. Some write like a patchwork comforter (Mark Twain), others like a lace doile (Cooper). Both are enjoyable. And the whole historical aspect was wonderful.

a story about a double agent whose boss wants him executed that refuses a pitiful pay and then hides from society as a penniless tramp. As if governments just use their momentary hero's then promptly cast them out with a soul full post trauma?

The reading style of the readers what is slow and disturbing. Could not get past chapter 2. I wish the book had better readers

Mr. Twain, this is enjoyable

Both Mark Twain and I dislike Cooper. His descriptions are usually just too long and get in the way of the story. However, The Spy is different. It’s told largely via dialogue, has plenty of action and suspense. Altogether a jolly and enjoyable read/listen. Highly recommended.

The story may not be riveting but it gives an interesting glimpse into the complex political stituation of the American war of Independence. The majority of the readers are very good. You may want to get used to the word "female" being employed to designate women and girls...