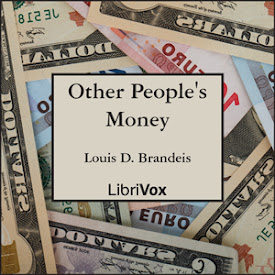 Other People's Money and How the Bankers Use It is a collection of essays written by Louis Brandeis published as a book in 1914. The book attacked the use of investment funds to promote the consolidation of various industries under the control of a small number of corporations, which Brandeis alleged were working in concert to prevent competition. Brandeis harshly criticized investment bankers who controlled large amounts of money deposited in their banks by middle-class people. The heads of these banks, Brandeis pointed out, routinely sat on the boards of railroad companies and large industrial manufacturers of various products, and routinely directed the resources of their banks to promote the interests of their own companies. These companies, in turn, sought to maintain control of their industries by crushing small businesses and stamping out innovators who developed better products to compete against them.

Brandeis supported his contentions with a discussion of the actual dollar amounts -- in millions of dollars -- controlled by specific banks, industries, and industrialists such as J. P. Morgan, noting that these interests had recently acquired a far larger proportion of American wealth than corporate entities had ever had before. He extensively cited testimony from a Congressional investigation performed by the Pujo Committee, named after Louisiana Representative Arsène Pujo, into self-serving and monopolistic business dealing.

The book received great publicity at the time, and was widely lauded by legal academics. Attention to the book was amplified by Brandeis' nomination to the Supreme Court of the United States in 1916.(Summary by Wikipedia) (5 hr 16 min)

02 - How The Combiners Combine

06 - Where The Banker Is Superfluous

10 - The Inefficiency Of The Oligarchy

Explains how modern banks supresss compeition and how this has happened

Wow! I suspect that THIS BOOK accounts for the actual facts behind Ayn Rand’s Atlas Shrugged. Any Ayn Rand fan who believes in functioning with an open mind will be well served to listen to this!!