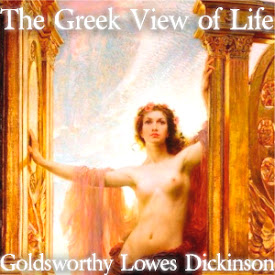 The Greek View of Life

“With the Greek civilisation beauty perished from the world. Never again has it been possible for man to believe that harmony is in fact the truth of all existence.”

This elegantly-written work provides a splendid introduction to the Greeks of the classic period: how they thought, wrote, and organised their lives and loves. Although it dates from the 1890s, there is very little about it that has dated. To its author’s credit, the subject of “Greek love” is dealt with in a sane and factual context - despite the judicial assassination of Oscar Wilde going on in the background.

A Cambridge don much admired by his students (including E. M. Forster), Goldsworthy Lowes Dickinson belonged to the Apostles, a secret society with a strong ethic of male friendship. Alfred Tennyson and his beloved Arthur Hallam were early members. Dickinson is chiefly remembered as a historian and pacifist who played a significant part in the founding of the League of Nations. Inevitably, given his interests and intellectual background, he became a close associate of the Bloomsbury Group.

The Greek View of Life is no dry academic tome. It is a popularizing work in the best sense: accessibly written and illustrated with apt quotations given in sturdy translations, never in the original Greek. It is a joy to read.
(Introduction by Martin Geeson) (10 hr 55 min)

01 - Chapter I: The Greek View of Religion. Section 1 - Introductory

02 - I.2 Greek Religion an Interpretation of Nature

03 - I.3 Greek Religion an Interpretation of the Human Passions

04 - I.4 Greek Religion the Foundation of Society

06 - I.6 The Greek Conception of the Relation of Man to the Gods

12 - I.12 Critical and Sceptical Opinion in Greece

19 - II.2 The Relation of the State to the Citizen

23 - II.6 Forms of Government in the Greek State

25 - II.8 Property and the Communistic Ideal

28 - II.11 Sceptical Criticism of the Basis of the State

38 - III.9 Protests against the Common View of Woman

44 - IV.2 Identification of the Aesthetic and Ethical Points of View

I love Martin Geeson. All of his readings are impeccable. Thank you, Martin!

Well read, and I gave this book four stars because obviously the author did his research. However, I did find it somewhat wordy and boring at times. I believe the author put his own views on morality in the book, and since most of it was hearsay more than 2,000 years after the fact, I'm not so sure the picture is completely accurate. There was little mention of the poor population and struggles, but mostly focus on the Elite Class, which the author does acknowledge. I did skim a bit when a chapter became repetitive or boring and I felt like I was getting the point already. I think the summaries we're good, and definitely would recommend Reading part 3 of Friendships, as the essay within it was amazing. Also, was interesting concept of balancing the physical aspects of self with the social, etc. After reading about the early history of China, India, Buddhism, Etc, I don't think the Greeks we're all that advanced, and unfortunately as throughout history a lot of their focus was on War.

Clear well paced delivery. Excellent use of emphasis to enhance comprehension of the text.

Foundational Understandings of Civilization, spirituality and how they where re…

I didn’t really know what to expect with this audiobook but within 5 minutes I was hooked! The narrator brought this book to life in a way that did justice to the subject matter. The pace, format, characterizations and the richness of this book absolutely changed my understanding and appreciation for the legacy that the Greek civilization has left behind. Just amazing. The concepts of citizenship and individuality, the reconciliation between nature and man in the origin to Greek mythology, this book is just as esoteric and philosophical as much as it is a review of a bygone culture. Will definitely listen to this one again. I highly recommend it.

Greeks laid the foundation for the western imperialism and Heternormativity that was the root cause of George Floyd's death. Sure they may have been notorious pansexuals, but the Greeks Did not have a sufficient number of dildo parties to not be considered homophobes. Rather than sneaking into troy with a horse they should have snuck inside a giant phallus. Coincidentally not only were they homophobes, the were also notorious phalogocentric oppressors of womxn and nonbinaries. They were also raycyst. No LatinX person's were amongst the Greek ranks. They opposed undocumented immigrants and kicked the Persians out. But their most egregious intolerable sin is being white.

Is this for real?

I can't believe what I'm hearing. What a thespian. This kind of voice might be appropriate for reading bedtime stories to children under the age of 3, but not for an adult non-fiction book about ancient Greek culture. This guy sounds like Neil Patrick Harris playing the villain from A Series of Unfortunate Events, only hammier. I gave it an extra star for the laugh I got, but it's ultimately unlistenable.

A beautifully researched book read in a masterly manner. To both gentlemen I will be eternally grateful.

I liked everything about it but that some of the sections seemed short.