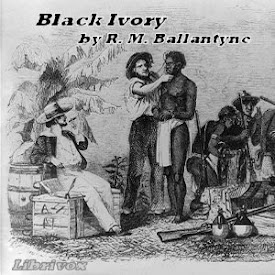 Although the book's title Black Ivory denotes dealing in the slave trade it is not our heroes who are doing it. At the very first chapter there is a shipwreck, which leaves the son of the charterer of the sinking ship, and a seaman friend of his, alone on the east coast of Africa, where Arab and Portuguese slave traders were still carrying out their evil trade, despite the great efforts of patrolling British warships to limit it and free the unfortunates whom they found being carried away in the Arab dhows.

Our heroes encountered a slave trader almost at the very spot where they come ashore, and thereby managed to get to Zanzibar in a British warship that had captured the trader's dhow in which our friends had hitched a lift.

At Zanzibar they pick up some funds, and set forth on a journey into the interior. Here again they encounter the vile trade, but most of the story deals with other encounters of a more acceptable nature.

This book will open your eyes to what really went on. At the time of writing slave-dealing on the west coast of Africa was, due to the efforts of the British, almost extinct, but this was not the case on the east coast. (Summary courtesy of Nick Hodson, http://www.athelstane.co.uk) (9 hr 36 min)

This book really tells the truth about the slave trade and the cruelty that happened. Also Tom Wise is a very good reader.

Narration is clear and well done, decent plot. But the constant insertion of bible banging and spreading of WASP, British colonization and religious domination being the “Only Cure and Road” into making the “Dark Interior” White enough to be taken into a state worthy of being accepted as worth the time and effort to be accepted as a colony, and only a low class colony at best. Bibles are not the answer to all evils, and preachers are all to often flawed and frail castles built on the sands of human weakness !!!

Good read. Lengthy story with detailed travels within Africa in the early days of the European exploration of the continent with various involvements with the dark side of slave trading, and related. Good yarn. Thanks!

Bravo! Bravo! I did not want this story to end. I enjoyed it very much. I will most likely listening to it again.

at times, I cried. hard to imagine men capable of such atrocities!

a fascinating historical novelabout the stages of yeast