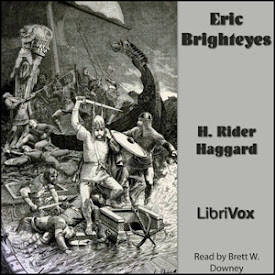 The Saga of Eric Brighteyes is the title of an epic viking novel by H. Rider Haggard, and concerns the adventures of its eponymous principal character in 10th century Iceland. Eric Thorgrimursson (nicknamed 'Brighteyes' for his most notable trait), strives to win the hand of his beloved, Gudruda the Fair. Her father Asmund, a priest of the old Norse gods, opposes the match, thinking Eric a man without prospects. But deadlier by far are the intrigues of Swanhild, Gudruda's half-sister and a sorceress who desires Eric for herself. She persuades the chieftain Ospakar Blacktooth to woo Gudrida, making the two men enemies. Battles, intrigues, and treachery follow. (Introduction by Wikipedia) (10 hr 17 min)

How Asmund the Priest Found Groa the Witch

How Asmund Bade Eric to His Yule-Feast

How Eric Came down Golden Falls

How Eric Won the Sword Whitefire

How Asmund the Priest Was Betrothed to Unna

How Asmund Spoke with Swanhild

How Swanhild Bid Farewell to Eric

How Eric Was Outlawed and Sailed a-Viking

How Hall the Mate Cut the Grapnel Chain

How Eric Dreamed a Dream

How Eric Dwelt in London Town

How Swanhild Walked the Seas

How Koll the Half-Witted Brought Tidings from Iceland

How Eric Was Named Anew

How Hall of Lithdale Took Tidings to Iceland

How the Feast Went

How the Feast Ended

How Eric Ventured down to Middalhof and What He Found

How Swanhild Won Tidings of Eric

How Went the Bridal Night

How the Dawn Came

How Eric Sent Away His Men from Mosfell

How Eric and Skallagrim Grew Fey

How Eric and Skallagrim Fought Their Last Great Fight

I am a happy ending type person but this was really well written and prepares the reader for what is to come so I didn’t walk away feeling devastated. It felt like it all ended the way it was supposed to. I really enjoyed this and look forward to reading more of Haggard’s brilliant work.

what a good book

it was good, it had battles and love and betrayal and drunkenness. it had witchcraft and hellhags. so much death and gore and so well read! thank you

Brilliantly read Brett.... a tale of its time which, if written today, would undoubtedly end happily ever after, but here does not.

entertaining. decent reader, he sounded like a 1950s radio broadcast

another great story with sad ending

A wonderful tale, true to it's time and beliefs. Though the ending is tragic and sad, it could not have ended any other way. Great reading, thank you!