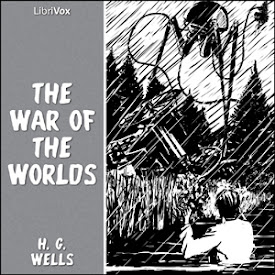 The War of the Worlds

H. G. Wells wrote The War of the Worlds in 1898, when there was much speculation about life on the planet Mars. The book is considered to be one of the first science fiction novels. In the story, an English gentleman narrates the events of a violent and fast paced Martian invasion.

The frightening images of people fleeing from gigantic tripod machines and the prospect of life under Martian rule have served as a bottomless well of inspiration for popular culture. The novel has served as a template for many derivative or inspired works, including comics, countless books, a TV series, several films, a bestselling musical, and the famous Orson Wells broadcast. Overall, The War of the Worlds has become an early milestone in and inspiration for the invasion genre.

The novel demonstrates Wells' typical pessimistic outlook on human nature and offers a good deal of criticism on society and people's ignorance and vanity. The War of the Worlds can be read as an indictment of European colonial actions around the globe at that time - with which the injustice of the Martian invasion can be compared. Wells has since been credited with predicting quite a number of technologies, such as laser-like rays, industrial robot-like machines, and chemical-warfare.
(Summary by Stephan Möbius and Annie Coleman)

I was so looking forward to listen to this book since I found the book so interesting years ago. Normally you get into a rhythm with the person reading, not with this book, it made very difficult to relate to main character having different people reading each chapter. It was very disappointing.

I enjoyed the detail H. G. Wells puts into this work. He paints a good picture for the reader. Some readers were more enthusiastic in their reading than others, but my attention didn't lapse even with the more monotone readers at the slower parts of the book.

it was a chilling listen. great for the heat😆

I started listening to this one sunday when I had committed to cleaning the bathroom in its entirety. (classy sentence structure😎) but for reals I wanted to focus on getting the bathroom cleaned up and this helped focus and motivaite me because it was a very interesting listen. classics like this are pretty easy to dismiss as old and boring, but often times when I've read or listened to old favorites like this, I find they were popular for a good reason. There are several different ppl making the recordings for this but I didnt find it to be overly distracting and each narrator has a clear tone. so yeah I'd say its a good listen. recommended🖒

I liked this book. It was a very special way of looking at the way people would act in a alien invasion and the ending was surprising. It takes you through a life that has been turned upside down and let’s you feel the same thing that the person in the book is feeling. Also the reading was okay. Some of the readers were better than others but only one or two of the chapters was not done well.

I've read q lot of scifi over the years and the bulk of futuristic books are comparatively far fetched. Wells, while written as taking place current to his time, presents the possibilities of advanced races having what has since proven to be possible and in many cases is in current use. How could he have envisioned our current progress while living in the 19th century? His visions bring to mind DaVinci.

Story is amazing but as usual librivox destroys any literary beauty by allowing different readers for each chapter. Chapter 2 was as far as I got. I was trying to drift off but the reader erratically bursts into high volume and pitch at different points of every sentence. Try it with headphones. Made my eyes nearly pop out every few seconds. Shame because I was really looking forward to this one.

I took Avid Readers advice and listened to this over several nights in bed in the dark. Yes, some of the readers were not as good as others but the entire book was fantastic. Will probably listen to it in the dark again when I have run out of other books to listen to. I think H.G. Wells would have loved this version.

Thoroughly enjoyed this book particularly, I feel, because of the variety of readers. Each reader having a distinct accent and often peculiar pronunciation (especially in the case of Stephen M. who is not a native English speaker, but who's accent adds an elegant touch, and a truly other-worldliness to his chapters) makes for a lively production of this awesome tale.