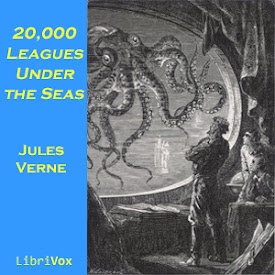 Professor Pierre Aronnax is an academic whose thirst for knowledge carries him out of his ivory tower and on the trail of a mysterious sea beast. His curiosity at last is satiated when he finds himself in the belly of the beast-- that is, on board the incredible submarine the Nautilus, courtesy of its mysterious pilot Captain Nemo and in the company of his servant Conseil and sailor Ned Land. (Introduction by Piper Hale) (16 hr 43 min)

07 - A Whale of Unknown Species

15 - An Invitation in Writing

18 - Four Thousand Leagues Under the Pacific

22 - The Lightning Bolts of Captain Nemo

26 - A New Proposition from Captain Nemo

27 - A Pearl Worth Ten Million

31 - The Mediterranean in Forty–Eight Hours

46 - The Last Words of Captain Nemo

Ok, guy who reads chapters 24-26... I swear he's trolling the audience. You can tell he has a nice voice and knows how to read, but it sounds as though he's trying to do some bizarre combination of Jerry Seinfeld, William Shatner, and an English Accent.

A great audio read...wforith exception to 24-26. This is the book I have chosen to listen to as I fall asleep over the past few weeks averaging one chapter a night. unfortunatey 24, 25, and 26 have been so unbearable and downright painful to hear it has been keeping me up at night. I am troubled by this reader's attempts and thus far they have taken me a week just to get through these chapters. Something about his tones and reflections truly frighten me to the core. Something wicked this way comes, and it chapters 24, 25, and 26.

a classic, interesting historically as an early sci-fi novel, but the story itself isn't very engaging. many parts are extremely technical (physics, engineering, and biology), and thus can be boring if you aren't interested in that. I was only really excited during 3 parts of the book, and the ending wasnt great. and as others said, chs 24-26 are painful to hear, read in such an overexaggerated and slow fashion.

all in all a very well read book...YET, like everyone says, the reader of chapters 24-26 has no idea what the use of emphasis is for! His chapters should be removed and read by someone else. it is almost painful to listen to his reading and distracts from the story. other than that, all the other readers did very well.

exceptionally well read, needless to say the novel is nothing shy of superb. the one and only reason I rated 4 stars is simply because of the individual who read 24-26 who sounds like he is attempting to speak English to aliens. butchered is the slightest term one can use describe his "reading."

Good for a free recording

The opinion stated by the majority of the reviews here are very accurate including the sentiments about the quality of ch 24-26, I managed to listen to those chapters but his reading is exceedingly annoying. You could pick any person off the street to read those sections and they would do it with a tone and inflection that sounded reasonably normal which is more than you can say about his version.

I love the book, Jules Verne was a writer-genius far ahead of his time. One just needs to accept the context and language of the time and age it was written. My kudos to all the readers, except the kindergarten whacko who ruined the chapters 24-26 - if it was not for him, I'd give five stars.

Love the reading of this book.... Except the guy who reads chapters 24 25 26. Its almost unbearable the only reason im bearing it is because i wanna finish this book. Im literally getting a headache from these chapters The others are great.