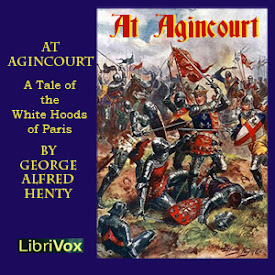 At Agincourt - White Hoods of Paris

The story begins in a grim feudal castle in Normandie. The times were troublous, and soon the king compelled Lady Margaret de Villeroy, with her children, to go to Paris as hostages. Guy Aylmer went with her.
Paris was turbulent. Soon the guild of the butchers, adopting white hoods as their uniform, seized the city, and besieged the house where our hero and his charges lived. After desperate fighting, the white hoods were beaten and our hero and his charges escaped from the city, and from France. (Summary from the original back cover) (10 hr 13 min)

Henty's style gives an in-depth look at individual lives of prople as well as furnishing good historical background. The reader is well-voiced and always readily understandable.

The story was interesting and held my attention to the very end. The narrator did an superb job throughout the chapters of the book.

Really well written and magnificently narrated by Mike Harris again....really brings G A Henty to life! Thanks so much

Pretty good book, a little fast paced, but keeps you interested throughout the story. One reader which is great! Some odd sounds during the reading, birds maybe? but overall good story telling by the reader.

It was nice to hear a story intermixed with the going’s on in Paris during the Burgundian/Orleanist conflicts. Henty did a great job portraying the feel of the city and the capriciousness of the mob and of the nobles. These two elements of society were more alike than either would have accepted.

Lord Villaroy's castle sits on the border between France and England. While technically at peace, the peace is quite tense, and on the verge of becoming an outright war. Villaroy's castle is attacked by an informal French force. Severely beaten, they return to France and report negatively on Villaroy, who is then ordered by France to either submit to a garrison being left at his castle, or to allow his wife and children to become 'guests' of Paris as a symbol of his loyalty. Little do the ruling classes of France realize that soon they will be in the midst of civil war, nobles against working class, with Lady Villaroy and her children trapped in Paris. How will they flee when they are viewed as English spies? I can't say enough wonderful things about the reader; his mellow voice lends well to the writings of Henty. Enjoy!