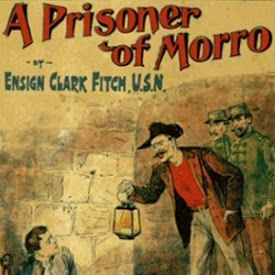 A Prisoner of Morro

Upton Sinclair, born in 1878 was a Pulitzer Prize-winning American author. He wrote over 90 books in many genres. Best known for his muckraking novel, The Jungle, Sinclair also wrote adventure fiction. Many of these works were written under the pseudonym, Ensign Clark Fitch, U.S.N. A Prisoner of Morrow, published in 1898 when Sinclair was but 20 years old, is one of these efforts. The period for this work is the ten-week Spanish–American War which occurred in 1898. Revolts against Spanish rule had been prevalent for decades in Cuba and were closely watched by Americans. The main issue of the war was Cuban independence from Spain. The war was notable for a series of one-sided American naval and military victories and led to the downfall of Spain as a colonial power. Clif Faraday, a naval cadet, is the main character in this novel. Stationed on a gunboat off the Cuban island as part of the U. S. naval blockade, Clif survives a series of confrontations at sea and treacheries on land. He is captured while on the island during a mission and lands in a Cuban prison called Morro, renowned for its cruelty. Clif receives aid from an unlikely source when all seems lost and survives to show commendable leadership and canny judgment. If you are looking for social commentary from Sinclair, this is not the book. If you want an entertaining listen reminiscent of “old-time” radio weekly serials where the hero faces dire consequences at the end of the each week’s program, then you should enjoy this story. (Summary adapted from Wikipedia and modified by the Reader) (5 hr 30 min)

Reader did an excellent job. The Story was excellent until the last chapter. Lt H ending was irrational for one who prays to God. It was very disappointing that the writer sees suicide as a peaceful end when in reality it is not.

This is an enjoyable tale of derring-do undertaken by a young naval cadet during the Spanish-American war of the late 1800s. The exploits of Cliff Faraday are quite reminiscent of those set out in the Hornblower books; not deep on description, just a good period adventure romp. Chapeau to Tom Weiss who I follow as a narrator for new books to enjoy.

There are few novels or short stories about the Spanish-American war. So, this entertaining short novel is in a way unique. The story line is entertaining, but the reader/listener should remember that the culture of early 20th century America was very different than that of today. I found the reading well paced and easy to understand.

Well read fast paced story very entertaining with a glimpse into the Cuba of the late 1800's during the war.

Fun book! Tom Weiss does a great job, as usual.

really well read many thanks to volunteers.

very fast-paced and fun to listen to.