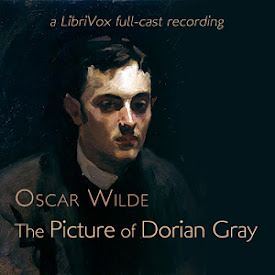 The novel tells of a young man named Dorian Gray, the subject of a painting by artist Basil Hallward. Basil is impressed by Dorian's beauty and becomes infatuated with him, believing his beauty is responsible for a new mode in his art. Dorian meets Lord Henry Wotton, a friend of Basil's, and becomes enthralled by Lord Henry's world view. Espousing a new hedonism, Lord Henry suggests the only things worth pursuing in life are beauty and fulfillment of the senses. Realizing that one day his beauty will fade, Dorian expresses his desire to sell his soul to ensure the portrait Basil has painted would age rather than himself. Dorian's wish is fulfilled, plunging him into debauched acts. The portrait serves as a reminder of the effect each act has upon his soul, with each sin displayed as a disfigurement of his form, or through a sign of aging. This reading uses the 20-chapter 1891 version of Wilde's novel. (Summary by Wikipedia)

First, yes Dorian was so miscast! It was pretty bad. I wasn't crazy about the narrator either. Lord Henry was absolutely wonderful. For the story itself, I mean, it's a classic for a reason. And because of Wilde's experience as a playwright this novel makes a great audio book - easy to follow by listening alone. There was one chapter I didn't care for, where I feel Wilde was showing off his worldly knowledge. other than that, I think I may buy a hard copy because I loved the story so much.

Thank you for a committed read, however, it was impossible for me to picture a beautiful, young, sensuous man in Dorian with that voice. Also the narrator was a bit too dramatic for my liking; made it seem like he was making fun of Oscar Wilde's writing. I would personally enjoy a more neutral approach. Still, excellent work and effort. Thank you!!

When Your Hot Young Tinder Match Is 57 And Full Of Cheap Whisky...

I have read the Picture of Dorian Gray about 8 times and decided to revisit it, this time in audiobook form to improve my morning commute. The first few minutes were jarring as I couldn’t decide if the main narrator was circling into the astral plane or trying to seduce me and failing miserably (and humorously). Imagine my absolute horror when at last “Dorian” spoke and had a deep, mumbling, wheezy voice. Not the voice of a tempting, youthful, Adonis-like muse but more like that of the weird British uncle I’ve never had, uttering of his innocence and astonishment with aesthetics while shoving caramels into his sinuses. I tried listening a few more times and had to stop after the dinner scene with Lord Henry, as a number of the dinner guests/actors sounded like they were recording from inside bathroom stalls. Many of the voice actors were also Americans and for a story which picks on Americans often enough to make this detail memorable, this was not a good choice. TL;DR: Dorian sounded hideous and I couldn’t finish the book.

one of my favorite books

I've read this book several times since high school, I am now 29. this is 1 of my all time faves. I am searching for audio books like this to listen to daily but keep coming back to this book. The various voices used for each character is brilliant, giving life and realism to the reading. and keeping listeners engaged thru out. yes, the guy doing dorian seemed a misfit, as he didn't sound very young or clear as I would have imagined. However, once u chalk it up to irony, the voice sumhow fit the picture of the portrait in my mind... it kinda comes together in a comedic sorta way. However, I would hope the reactions of readers would encourage the ppl who run librivox to at least audition volunteers before casting them for certain roles. overall, a great story. not difficult to understand as sum may assume given how old the tale is. quite witty and just entertaining in general.

all excellent but one

I wish I could give this 5/5 but Dorian was so miscast. I found myself attempting over and over again to try to understand him, but the mumbles continued through the entire reading. he did not sound at all like what I would imagine a 17 year old man who is skilled in charming everyone with wit, innocence and beauty. it sounded more like an elderly man who was engaged in the activity of consuming opiates. all this being said, I found everyone else to be exquisite. Lord Henry was quite titillating to the ear, and I cannot imagine a better actor for the part. some are upset with the narrator. I found him at first a little odd, but after the first chapter I enjoyed him quite well. his manner just took some getting used to. all other cast members were great as well. 4/5

Please, change the reading of Dorian. It's dreadful! This voice don't fit the character in any way. Perhaps, Anthony would be better, and Alby Pug must reading the painter, better macth for his voice. I'm spanish reader who use this listening books to improve my english, but seriously, this voice remember me and old man without real teeth, not a young one discovering his own passions, sins and emotions. It fits more with the moralist painter of the picture. I love all the others! Good job!

an answer to that awful review

I really hope you are volunteering to read for LibriVox, because if you do, you'll realise how hard it is to get a role claimed... especially a role as big and complicated as this one. And please do bear in mind that LV volunteers are not professional voice actors, just plain volunteers who have had a little time and courage to share their voice and tell a story. Great job everyone.

I didn't know that "The picture of Dorian Gray" had a different kind of sensuality to it. It is the other type of sensuality than the versions presented on television. Television would portray him as the "dark" kind of handsome, roguish with dark hair and chiseled features as opposed to the original wherein he looks more angelic like with curly blonde hair and soft features as if he was as innocent as a cherub. This beauty that Dorian Gray possesses seems so harmless as if he could not do anything wrong. However, he could never escape the darkness of his actions because it reflects on the portrait. As far as the casting goes, I liked the voice of Basil. I wish he did Dorian's voice. Dorian's voice seemed a bit old and would not fit the innocence he is to portray.