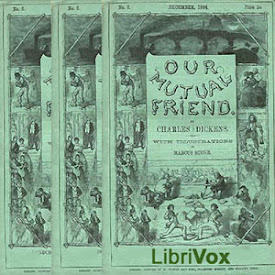 Our Mutual Friend (written in the years 1864–65) is the last novel completed by Charles Dickens and is one of his most sophisticated works, combining psychological insight with social analysis. It centres on, in the words of critic J. Hillis Miller, "money, money, money, and what money can make of life" but is also about human values. In the opening chapters a body is found in the Thames and identified as John Harmon, a young man recently returned to London to receive his inheritance. Were he alive, his father's will would require him to marry Bella Wilfer, a beautiful, mercenary girl whom he had never met. Instead, the money passes to the working-class Boffins, and the effects spread into various corners of London society. (Wikipedia) (32 hr 40 min)

36 - Book 3 Chap. 03 THE SAME RESPECTED FRIEND IN MORE ASPECTS THAN ONE

42 - Book 3 Chap. 09 SOMEBODY BECOMES THE SUBJECT OF A PREDICTION

68 - POSTSCRIPT, IN LIEU OF PREFACE

This is the second time I've listened to this book and I see much more of the humor and love that Dickens had for his characters this time through. The contrasting couples and their contrasting relationships cover the waterfront and bring humor and joy for some, sadness and bitterness for others. Quite a painting of the best and worst of the marital state! This is the second reading of "Our Mutual Friend" in the Librivox catalog. Don turns in a excellent solo work - no accents or voices, just a solid American read that lets the story shine through. For those who would like a reading with British accents and a variety of voicing, check out the earlier group recording at <a href="http://librivox.org/our-mutual-friend-by-charles-dickens/" rel="nofollow">Our Mutual Friend</a>.

A great, multi-strand story, not quite as sentimental as some of Dickens's other works. Many thanks to the reader for this marathon read! British readers may find American voices a bit difficult at first, but I'd say in this case, stick with it, because, as another reviewer says, Don W Jenkins 'let's the story shine through '. And I love the laid -back upbeat tone of his introductions to each chapter!