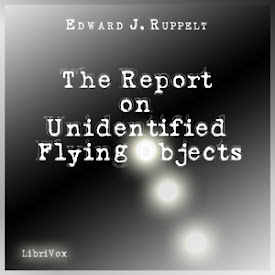 The Report on Unidentified Flying Objects

'Straight from the horse's mouth', as they say. Edward Ruppelt was the first head of the U.S. Air Force's Project Blue Book, the official project initiated to investigate UFO reports beginning in 1952. This report from 1956 takes us inside these initial investigations, separates fact from fiction, and gives insight into who, when, where, and how sightings were reported and researched in open-minded fashion (for which Ruppelt was renowned), rather than in the typical hushed and secretive (and censored) manner most often associated with government and military reports which are released to the public.

Dozens of specific sightings are recounted, although hundreds more had come pouring into the agency during the period covered (and hundreds, if not thousands more that were never officially reported). Here we go inside the workings of Project Blue Book, which had evolved from 2 earlier Air Force projects, and we are witness to interviews, press conferences, Pentagon briefings, and many reports from civilian and military pilots, Air Traffic Controllers, office workers, farmers, and the man on the street who reported their accounts with UFOs. And not all sightings that were reported were restricted to the U.S.

Although Project Blue Book would continue until 1969, here we witness an in-depth account from it's inception and it's earliest stages, the political obstacles, the houndings from the press, the overall confusion encountered during and following many of the sightings, and the near hysteria caused during the heyday of UFO sightings, and all from the man who headed up the project in it's earliest years. The second edition of Ruppelt's work was supplemented with 3 additional chapters which were added in 1960, and we are fortunate that they are included here. (Summary by Roger Melin) (16 hr 5 min)

02 - The Era of Confusion Begins

19 - Off They Go Into the Wild Blue Yonder

I am enjoying this recording a lot. The reader is excellent and moves at a well measured pace. As I listen while driving I notice I pay a little more attention to the sky than I did previously.

I really enjoyed listening to this. Fascinating and informative. Roger Melin does a wonderful job of taking dry material and infusing warmth and even a little humor, but not dismissive. Go into this with an open mind.

I noticed throughout Roger’s reading that I told myself that he wasn’t the author because he does a perfect job of always hitting the right tones. Roger never gives the feel of someone simply reading a book. He made me feel as if he were telling me the story like he was interested in letting me know what had taken place if that makes any sense. From beginning to end I sat on the edge of my seat wondering what would be talked about next. It took me a few days to hear the entire account. As I looked forward to what was coming next I was dreading it all coming to a conclusion because I didn’t want the ride to end. I am now going through other books that Roger has read because he does such an awesome job! Thanks Roger for so many hours of enjoyment. I drive 10 hours a day and you’ve become my companion in my travels.

Thank You. The pace and style does fit the content. Whatever your views on offworlder visitors or intra world visitors, this is a really good listen to one of the people who set up The Blue Book and investigated some of the UFO reports and the problems encountered. It is fairly long and to my mind worth the time.

One of the better books on UFO’s, read with an engaging voice. I had no idea the amount of financial and manpower investment the USAF was making in investigating all the reports that came in. I take my hat off to their thoroughness. Highly recommended!

if you're looking for an objective viewpoint on the subject of unidentified flying objects, this most definitely should be your start point. a well-written and superbly read inside account on the early days of project blue book.

I love this classic and could go on about it, but it is the narrator who stands out as being so deserving of praise in this forum. He does an absolutely outstanding job.

Well written and informative. The reader is clear and precise in his reading.