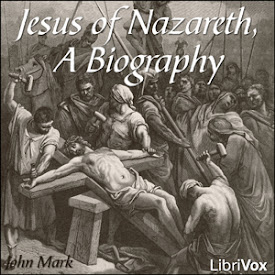 Jesus of Nazareth, A Biography

"Jesus of Nazareth, a Biography, by John Mark," recognizes the author of the second Gospel as that "John, whose surname was Mark" (Acts 15:37), whom Barnabas chose as companion when he sailed for Cyprus on his second missionary journey. In making use of the new title, the plan of the Editor is to present "The Gospel: According to Mark" as it would be printed were it written in the twentieth rather than the first century. (Introduction from Forward, by D. Appleton & Co, Publishers, 1922) (1 hr 41 min)

l, would say that this was a good book the way he lives and

Died and he read it very well for all

Jesus of Nazareth, a Biography

This narrator is completely unpreparedFor the task that he has undertaken. His delivery is so jerky and irregular that the meaning of the text is sometimes obscured. His pronunciation is often simply wrong. Completely below standard.

I didn't notice a speech impediment. It seems the narrator has never been to church because he mispronounced some of the most familiar words in the Bible. Pharisees was the most blatant.

I enjoyed reading Matthew very much. However, the reader has a severe problems with his pronunciation of S's. The sound was almost like a whistle.

some names not spoken with the accent on syllables as I know them. liked the narration was by one person

listen to With Android Phone and wire headphones. Another Greate

Nothing new or exciting vs the Bivl