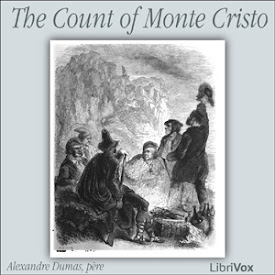 The Count of Monte Cristo

The Count of Monte Cristo (French: Le Comte de Monte-Cristo) is an adventure novel by Alexandre Dumas, père. It is often considered, along with The Three Musketeers, as Dumas's most popular work. The writing of the work was completed in 1844. Like many of his novels, it is expanded from the plot outlines suggested by his collaborating ghostwriter Auguste Maquet.

The story takes place in France, Italy, islands in the Mediterranean and the Levant during the historical events of 1815–1838 (from just before the Hundred Days through the reign of Louis-Philippe of France). The historical setting is a fundamental element of the book. It is primarily concerned with themes of justice, vengeance, mercy, and forgiveness, and is told in the style of an adventure story. (Summary from Wikipedia)

This book contains alternate versions of a number of chapters – indicated by an alt after the file number. The Zip files contain both versions of these chapters.

The Evening of the Betrothal

The King’s Closet at the Tuileries

The Cemetary of Chateau D’If

The Island of Monte Cristo

The House of Morrel & Son

The Fifth of September

The Carnival at Rom

The Catacombs of Saint Sebastian

The House at Auteuil

The House at Auteuil, altenate version

The Rain of Blood

The Rain of Blood, alternate version

A Flurry in Stocks

In the Lucerne Patch

At the Office of the King’s Attorney

The Progress of Cavalcanti the Younger

We Hear from Yanina

The Room of the Retired Baker

The Hand of God

The Departure for Belgium

The Bell and Bottle Tavern

The Fifth of October

This was one of my first LibriVox experiences (last year) and I loved it. I got a kick out of all the readers and their bdifferent voices and quirks, and I didn't find them at all unintelligible. By the end of the book some of them felt like old friends. I'm saddened by the number of reviewers here who are being downright mean to people who volunteered to read. You get what you pay for -- if you want a professional reading, buy one.

Didn't have a problem with the readers. No trouble understanding accents just fine, though some were a bit muffled. Only problem was that chapter seven was cut a little early. But it's free, I enjoyed it, can't complain.

much better than the movie! I don't mind the different readers, especially since there are alternatives to those chapters...relax, it's a free audiobook

it was a bit confusing to have so many different readers, some of who had very poor English skills and lacked the ability to pronounce any French words. Keeping in mind it was free and people, well meaning, did take their time to read the text so the rest of us could enjoy this classic book while going about our work or leisure and for this i am grateful.

Say what you will, I was impressed with the quality of the readers. By and large, they were excellent and I appreciate the time they took to make this a positive and enjoyable experience.

Proof that librivox is for the readers, not the listeners

The recordings of Ana Simão are proof of the Librivox philosophy that Librivox is for the readers, not the listeners. While I admire and appreciate Ms. Simão's generosity in volunteering her time to read for Librivox, I have to say I found her reading exceedingly difficult to understand, and very frustrating to listen to. It's like listening to someone who is unable to pronounce certain vowel sounds or combinations of letters. At times she sounds almost as if she speaks with a lisp. In some instances I had to give up trying to understand her reading and instead read the text online. If you have the patience to listen to several of her recordings you will began to better understand her reading, but it is still frustrating. Whenever I began listening to a new chapter and discovered it was not her reading, I thought, "Thank God!"

A bit here and there

This book have been a favorite of mine for many years, but I have never read it in English, and decided I wanted to listen to it here. Unfortunatly it seems that the PL haven't done their job properly, because there are several chapters which have several issues. To many of the readers speak badly English, and several readers buthcer the French names. To many chapters have backround noise, speed readers(skipping-over-the-words-fast) and other issues that should have been easy enough to fix. Edit: Chapter 115 cuts off very sudden, not really sure if it's actually finished or nor...