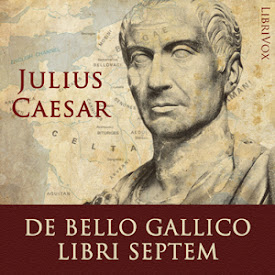 In this book the famous Gaius Julius Caesar himself describes the seven years of his war in Gaul.

When Caesar got proconsul of Gallia and Illyria in 58 B.C, the conquest of land in Gaul was an urgent need, both to improve his political standing and to calm his creditors in Rome. So Caesar claims his interest for a very large area already in the first sentence.

His steps and measures always appear clear and logical, but this simplicity is the result of a strict discipline in style. Caesar really chooses his words, and the list of standard words that he never or rarely uses, is astonishing. E.g. for "river" he only uses flumen and never fluvius or amnis. He avoids porro (furthermore), which would be no decided beginning of a sentence, and in his writings never occurs the word clades (the defeat), although this would normally be demanded by the context.

It is remarkable, that still today in all the lands of his conquest the word for "peace" is derived from latin pax (even basque "bake"). This peace is no friendship between equals, which is the idea behind the German word "Friede". Pax Romana implies subordination, and this concept was promoted by Caesar, first abroad and then at home. (Summary by Marilianus) (9 hr 56 min)

The Latin pronunciation is fine, albeit slightly accented -- it is the classical rather than the ecclesiastic pronunciation, however, which is probably what the other reviewer is referring to. A good reading, and useful for practicing oral Latin, and learning some Roman history.