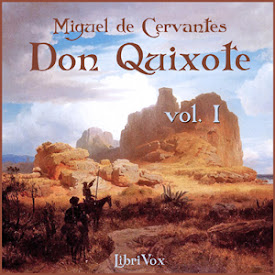 Don Quixote is an early novel written by Spanish author Miguel de Cervantes Saavedra. Cervantes created a fictional origin for the story in the character of the Morisco historian, Cide Hamete Benengeli, whom he claims to have hired to translate the story from an Arabic manuscript he found in Toledo's bedraggled old Jewish quarter.

The protagonist, Alonso Quixano, is a minor landowner who has read so many stories of chivalry that he descends into fantasy and becomes convinced he is a knight errant. Together with his companion Sancho Panza, the self-styled Don Quixote de la Mancha sets out in search of adventures. His "lady" is Dulcinea del Toboso, an imaginary object of his courtly love crafted from a neighbouring farm girl by the illusion-struck "knight" (her real name is Aldonza Lorenzo, and she is totally unaware of his feelings for her. In addition, she never actually appears in the novel).

Published in two volumes a decade apart, Don Quixote is the most influential work of literature to emerge from the Spanish Golden Age and perhaps the entire Spanish literary canon. As a founding work of modern Western literature, it regularly appears at or near the top of lists of the greatest works of fiction ever published. (Summary from Wikipedia) (21 hr 16 min)

this book is fantastic,deep, over the top, comical. Whatever your positive adjective, it applies to this book in one way or another. I dont want to rate the book too low because its as real work of art, but one reader kelly bescherer needs to have her chapters re-recorded. I just skipped chapters 33-40 because it was so unintelligible, she truly ruined the reading of this book.

One reader ruined it for me

I don't mean to be rude - and I tried hard to keep going on - but it was impossible for me to continue listening. All I can say is that all chapters read by Kelly Bescherer need to be re-read. I somehow managed to get past chapter 5, relieved that the reader was finally out of the project - but sadly she shows up again in chapter 16. The problem is if this was a solo project, I could have just not bothered listening - but this ruins the work of so many good readers who contributed. I guess there should have been some peer review - although too much to ask for something that's free, but it pains me to see a great work gone to waste.

I have to agree with reviewer "prat"

It was great up until chapter 16. Chapter 16 reader is Kelly Bescherer. While I think it is generous when someone volunteers to read for Librivox, I also think there should be some quality standards. Ms. Bescherer reads VERY quickly. You could say she is a "speed reader". Her reading is exceedingly difficult to understand, even for someone whose first language is English. She often mumbles words or stumbles over them. In some places, the recording has been edited and a correction by a different reader has been inserted. So obviously someone reviewed this work and knew there was a problem. Why no one asked Ms. Bescherer to re-record her chapters I do not understand. Ms. Bescherer's reading reminds me of myself when I was learning how to type. My teacher repeatedly admonished me to slow down. I could type very, very quickly, but I made a ton of mistakes.

great except for one reader.

you will know what i mean. being she speaks at such rapidity it is truly a wonder whether she is capable of breathing at all. as such, the whole joy of listening is lost in a blurr of barely enunciated monotony. other than her, it is rather great.

i love this story. I despise having it chopped up into separate readings, especially when the readers are terrible, especially that one who chews her words. Please get a solo copy done by a reader who knows how to enunciate without sounding like a whining fop:'(

started off well but the reader featherheadrop(??) dreadful. How to ruin a clas…

Difficult readers aside, this is a wonderful and influential work that clearly affected everything that followed it and broke ground in terms of style, tone, flow of story, and use of humor. It is heroic and beautiful, and most importantly, it is hilarious! Also, one of the chapters has been re-recorded and several of the difficult understand portions have been fixed, which makes it more listenable, although those chapters are still somewhat difficult. It is totally worth it though!

many readers where awesome but chapter 33 reader was just featherho ... its like she was in a race I had to read the chapter as had no idea what she was saying! other then that book is amazing.