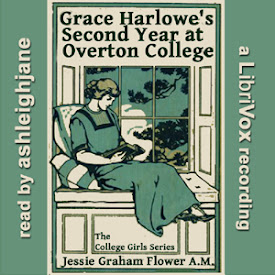 Overton Claims Her Own

Mrs Elwood to the Rescue

The Anarchist Chooses Her Roommate

Girls and Their Ideals

The Finger of Suspicion

The Quality of Mercy

A Gift to Semper Fidelis

If you lament over the over abundance of easily offended people nowadays, read this book. Not much has changed, except that forgiveness was a word in people’s vocabulary. This is a good series, nice reader although a few mispronunciations, but certainly no match to Anne of Green Gables! The series becomes a bit repetitive and loop-holey after a while. If you are looking for great classics, I recommend Jane Austen’s books (start with Sense and Sensibility for an easier listen), The Princess of Mars for a classic sci-fi, A Connecticut Yankee in King Arthur’s Court for a witty and entertaining book, any of E. Nesbit’s books for kids, and L.M. Montgomery’s books. However, the Grace Harlowe series is a good one for people who love likable characters and ongoing series.