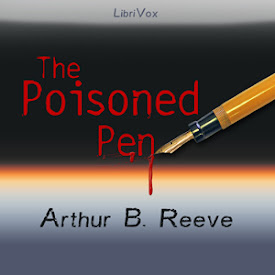 The many adventures of Professor Craig Kennedy were chronicled by Arthur B. Reeve (October 15, 1880 - August 9, 1936). Reeve was an American mystery writer who created 82 Craig Kennedy mystery stories. The stories have a very Sherlock Holmes type feel, In fact Kennedy has been referred to as the "American Sherlock Holmes". Along with his reporter friend, Walter Jameson, Kennedy solves many crimes and unveils mysteries using science.

This book contains twelve of Professor Kennedy's adventures. The interesting thing about these stories is Kennedy uses newly discovered science from his time period, which we take for granted today. The title story features the use of special inks. One which disappears in sunlight and one which appears in sunlight, so that the text on a note found in possession of a murder victim changes completely, making it almost impossible for Kennedy to track down the killer. Each story features a fascinating look at life in the early 20th century, and even includes some action along the way. (Introduction by Elliott Miller) (10 hr 16 min)

Great stories and I love the gadgets Kennedy comes up with. Great reading and stories. Thanks Enjoy!

Phone taps and 'photoshop' - are just some of the scientific achievements "previewed" in these stories. I just loved them!

First, the narrator is terrific. The different voices and the way he read, just excellent. I really enjoyed the short Mysteries. They were intelligent, well written and to the point. A really fun book to listen to.

What a great group of stories. Sherlock would definitely enjoyed, and even Hercule would have admired these little gray cells. The reader was super.

I enjoyed the listening experience provided by a talented reader. The stories were interesting though not deep, perfect for light distraction or while doing mundane activity. My only disappointment was that the summary provided gives the main plot point, the answer to the puzzle away. I hope that will be remedied for other listeners.

Very intriguing stories; I love listening to these! I really enjoy the science theme in these mysteries. one advantage they have over Sherlock Holmes is that you actually have enough data to figure them out before the solution is revealed (although it's not easy to figure out all the details, at least for me!).