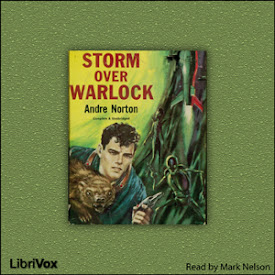 The Throg task force struck the Terran survey camp a few minutes after dawn, without warning, and with a deadly precision which argued that the aliens had fully reconnoitered and prepared that attack. Eye-searing lances of energy lashed back and forth across the base with methodical accuracy. And a single cowering witness, flattened on a ledge in the heights above, knew that when the last of those yellow-red bolts fell, nothing human would be left alive down there. And so Shann Lantee, most menial of the Terrans attached to the camp on the planet Warlock, was left alone and weaponless in the strange, hostile world, the human prey of the aliens from space and the aliens on the ground alike. (Introduction by from the Gutenberg text) (7 hr 10 min)

Chapter 12 - The Veil of Illusion

As usual, reading was superb. Classic andre norton science fiction for all to enjoy

There is no earth-bound magic here, just people using the terms that they know to label the unknown. So, "warlock", " witch", and the like just meant "alien" in this book. I personally would have enjoyed it more with more scientific terminology (it IS sci Fi), but it was fun regardless. Bravo, Mark Nelson!

I've enjoyed a number of Norton's tales, and this was another pleasure to listen to.

The terrans have begun to colonize a new planet, Warlock, a somewhat savage planet, but it has potential. The Throgs, an aggressive race that has been pursuing and warring against the humans, decides it wants Warlock and attacks the newly created colony. All the humans there should have been killed, but two manage to escape. Up to this point, it has been believed that there were no intelligent life forms native to Warlock, but the two survivors find themselves drawn to the sea while fleeing the pursuing Throgs. Could it be that there is an intelligent race calling to them? Mark does his usual awesome job reading. Thanks Mark!

Great story , read perfectly by Mark Nelson , what a combination !!! The only thing I would have liked is a longer story as there was plenty of opportunity for expansion i.e. The continuing fight against the throgs , the interactions with the planets original inhabitants .

This is a mix of sci-fi, fantasy and supernatural themes all in a rousting adventure format. I enjoy Andre Norton's work a lot and this is a good one. Mark Nelson is a fine narrator and brings the story to life well

It is a shame that Andre Norton has not gotten the deserved attention a master SF writer should have. Her ability to create worlds of imagination is magnificent. This story is just another masterpiece that shold be in every public school Library.

This is the first that I've listened to from this author, the plot kept me guessing and interested. Entertaining, I really enjoyed it. Mark Nelson did an excellent job reading as expected.