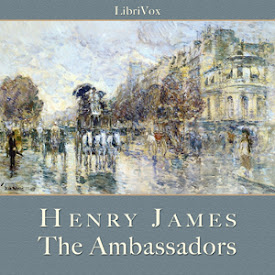 Henry James considered The Ambassadors his best, or perhaps his best-wrought, novel. It plays on the great Jamesian theme of the American abroad, who finds himself in an older, and some would say richer, culture that that of the United States, with its attractions and dangers. Here the protagonist is Lambert Strether, a man in his fifties, editor of a small literary magazine in Woollett, Massachusetts, who arrives in Europe on a mission undertaken at the urging of his patron, Mrs. Newsome, to bring back her son Chadwick. That young man appears to be enjoying his time in Paris rather more than seems good for him, at least to those older and wiser. The novel, however, is perhaps really about Strether's education in this new land, and one of his teachers is the city of Paris -- a real Paris, not an idealized one, but from which Strether has much to learn. Chad Newsome, of course is there too, and so are a scattering of other Americans, his old friend Waymarsh and his new acquaintance Maria Gostrey among them. Had Strether his life to live over again, knowing what he has now learned,. how different would it be? and what are the lessons he takes home with him? (Introduction by Nicholas Clifford) (16 hr 46 min)

I am working my way through a list of the 100 greatest novels of all time. I listen to them as I walk and work. I enjoyed Portrait of a Lady, #20 on the list, so I thought I would also like this one, too. (#52). Do not try to do anything else while you’re listening to this- you will miss what is going on. The language is beautiful and the reading is great, but I could not follow much of what was going on unless I stopped what I was doing and concentrated on the reader.

great reader. wonderful diction and pacing. it was like listening to james himself or to strether. immerses you in the book totally.

Excellent reading almost professional standard. This novel is perhaps James' best but also James at his most verbose and long winded.

Reader: Superb! Author: Not so Much

Nicholas Clifford is superb. Henry James? After listening to The Portrait of a Lady, and seeing James considered this his best-wrought novel, I expected more. I had a hard time following his convoluted sentences, unrealistic dialogue, and flights of philosophy or psychology or whatever it was. Come to think of it, I think I've heard of Henry James as being verbose and tiresome. I believe it after this book. Nevertheless, I stuck it out to the end to see where he'd end it. But I skipped the prologue at the beginning, and I cannot bring myself to listen to more of James' tedium.

Tiring and too grandiose. Lots of over-thinking busybodies. And the writing style of baiting one with a subject, then dancing around it, circling endlessly before finally spitting it out made me weary. There were a few points about freedom and being youthful that I enjoyed. But the subject of sex was apparently so taboo back then that it was never once mentioned openly. Nevertheless, a good reading, and I suffered through, only to find the ending flat as a pancake.

The story has depth and well drawn characters. I’ve been an intimidated reader of James but no more! It’s been a very enjoyable ride on the voice of Professor Clifford and Henry James has a new devoted fan. Professor Nicholas Clifford my heart is broken upon the news of your passing this year, 2019. May the Good Lord bless you kind sir.

MYRIADS OF WORDS ABOUT VERY LITTLE

There are far too many people with absolutely nothing to do. Unquestionably I enjoyed the masterful usage of words and phrases; James is virtually without peer in this. The story, if there truly was one, is irrelevant. It is my opinion that none other of your readers could have made this narrative bearable than Nicholas Clifford.

Such a great pairing. Nicholas' reading voice - understated and refined - is IMHO perfect with James prose.