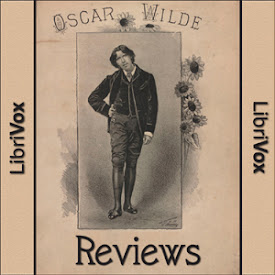 Wilde’s literary reputation has survived so much that I think it proof against any exhumation of articles which he or his admirers would have preferred to forget. As a matter of fact, I believe this volume will prove of unusual interest; some of the reviews are curiously prophetic; some are, of course, biassed by prejudice hostile or friendly; others are conceived in the author’s wittiest and happiest vein; only a few are colourless. And if, according to Lord Beaconsfield, the verdict of a continental nation may be regarded as that of posterity, Wilde is a much greater force in our literature than even friendly contemporaries ever supposed he would become. (19 hr 15 min)

A Bevy of Poets

Hamlet at the Lyceum

Henry the Fourth at Oxford

Olivia at the Lyceum

A Handbook to Marriage

Half-Hours with the Worst Authors

One of Mr. Conway's Remainders

To Read or Not to Read

The Letters of a Great Woman

The Poetry of the People

A Ride Through Morrocco

The Children of the Poets

Mr. Symonds' History of the Renaissance

A Sentimental Journey Through Literature

A New Book on Dickens

A Cheap Edition of a Great Man

A Batch of Novels

A Scotchman on Scottish Poetry

Mr. Morris's Completion of the Odyssey

A Note on Some Modern Poets

The Gospel According to Walt Whitman

One of the Bibles of the World

Index of Authors and Books Reviewed