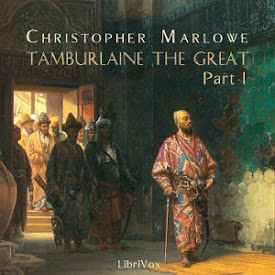 Tamburlaine the Great is the name of a play in two parts by Christopher Marlowe. It is loosely based on the life of the Central Asian emperor, Timur 'the lame'. Written in 1587 or 1588, the play is a milestone in Elizabethan public drama; it marks a turning away from the clumsy language and loose plotting of the earlier Tudor dramatists, and a new interest in fresh and vivid language, memorable action, and intellectual complexity. Along with Thomas Kyd's The Spanish Tragedy, it may be considered the first popular success of London's public stage.

Marlowe, generally considered the greatest of the University Wits, influenced playwrights well into the Jacobean period, and echoes of Tamburlaine's bombast and ambition can be found in English plays all the way to the Puritan closing of the theaters in 1642. While Tamburlaine is considered inferior to the great tragedies of the late-Elizabethan and early-Jacobean period, its significance in creating a stock of themes and, especially, in demonstrating the potential of blank verse in drama, are still acknowledged. (Summary by Wikipedia)

Very well-read, easy to follow text. It is obvious the readers thought about their parts and worked to put feeling and emphasis into the characters. I would've given it five stars, only my iPad refuses to go that high. Good job, Librivox! I will survive Renaissance lit because of y'all. Thank you from the bottom of my heart.

Clearly read and easy to listen to and follow along. The actors’ interpretations and inflections made the text come alive.

Excellently performed. I loved it.