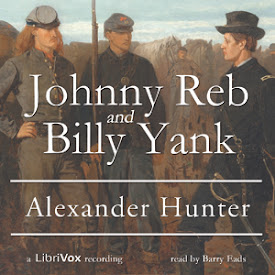 Johnny Reb & Billy Yank is an epic novel first published in 1905 by Alexander Hunter, a soldier who served in Confederate General Robert E. Lee's Army from 1861 to 1865. The novel is noted for encapsulating most of the major events of the American Civil War, due to Hunter's obvious involvement in them. The "novel" is actually pulled from Hunter's own diaries during the war. He explains his reasons for publishing his accounts in the preface to the novel-

"There were thousands of soldiers on both sides during the Civil War, who, at the beginning, started to keep a diary of daily events, but those who kept a record from start to finish can be counted on the fingers of one hand. I was so fortunate as to save most of my notes made during the four years of conflict, and in 1865, having no fixed pursuit in life, I spent most of the time in arranging and writing up these incidents of camp life while fresh in my memory. I have given in these pages veracious account of the life of a soldier in Lee's army...."

The novel is then divided into two parts, the first part chronicling Hunter's service in the infantry up until the Battle of Chancellorsville, and the second part depicting his service in the Cavalry until the end of the war. (Introduction by Wikipedia) (27 hr 48 min)

Well written, funny, sad, horrifying, graphic. I think it is a must read for any civil war history buff. Really encapsulates the life of a soldier and dispels many historical myths surrounding the rebel army. 10/10

excellent reader excellent book. a must for any civil war buff

First thing I've listened to another book read by Barry, and once again he was top notch. As for the book I found it interesting, as I'm a civil war buff, but found Hunter could be long winded in some of his chapters. I wish he just stuck to his own experiences, since he a lot of good stories to tell, and he could have shaved off 3 or 4 chapters. All in all it was a good listen and gave a different perspective not always seen in history books.

The most humanizing description of the civil war I have ever read. Nothing short of remarkable. Well read by someone who knows how to properly read such a valuable document. Would give it 10 stars if possible.

Whoroughly enjoyed this book. Viewpoint from both sides of the conflict. Good account of daily life.

Amazing true life story of a soldier and cavalryman in the CSA who was in the very thick of it for the entire four year war. Alexander Hunter had an amazing life. He was captured by the Yanks several times and escaped several times. This is a long book, all of it the true life diary and memoirs of Mister Hunter. It is terrifically ready by Barry Eads. Mr Hunter's commentary on the southern leaders is most interesting, He was contemptuous of many generals, like Gen. Early, as well as President Jefferson Davis. On the other had he had the greatest veneration for Stonewall Jackson and most especially Robert E. Lee. There were many ways he thought that the South could have won the war despite the tremendous odds, and I wish they did. I very highly recommend this book,