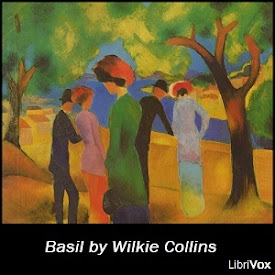 Basil, son of a father who values the family pedigree and who would not let him marry below his station, falls in love at first sight with a girl he sees on a bus. He stalks her and discovers she is Margaret Sherwin, only daughter of a linen draper. He stalks her and persuades her father to let him marry her secretly. He agrees on the condition, that, as his daughter is only seventeen, they live apart for the first year. At first the secret works, but then the mysterious Mannion, whose emotions cannot be read in his face, returns from abroad. On the last night of the year Basil follows Margaret and Mannion and discovers them in flagrante delicto. (Wikipedia) (11 hr 14 min)

Read by Kenny B

Thank you Librevox for recording this!

Great sensational novel by Wilkie Collins. The more of his books I read (or listen to) the more he becomes one of my favourite 19th Century English novelists. Is is OK to say I like him better than Dickens? Here we have a novel that begins as a love story but becomes a story of the ugliness of revenge, a picture of how desire for revenge consumes a person, reeks havoc on their lives and the lives of others, and does them no good. As one of the characters in the novel says, revenge adds no coin to your pocket. Also a novel about classism and snobbery, and the healing power of familiar love. OK, it's not The Woman In White or Moonstone. But it's still a great timeless novel, perfectly composed. The readers here do a marvellous job, all of them, my favourite being the man who read the first of the concluding letters.

A nice, early work of Collins and one of the last works of his I have not, until now, finished. I was shocked when, as I listened, I realized that a downright terrible film from the 90s had been very loosely based on this work. I'm so glad the book proved better than the movie (of the same name featuring Jared Leto and Claire Forlani). This book is a difficult read from the perspective of someone who sees women as human beings. In later works, Collins does a better job of representing even devious female characters as human and also commentates in a sort of progressive-ish way about the socio-moral limitations suffered by women at the time of his writings. Other reviewers have disparaged the character of Basil but I didn't think he was that bad. Most of the narrators were good, one or two were not great but fortunately brief.

My first Willie Collins book and most certainly not my last; I’ve been listening to recordings on here for about 6 months now in lockdown and I think this is my favourite story so far; ALL the readers were excellent and with a pace that just kept to listening chapter after chapter ; well done to everyone and thank you ALL so much for your time

Basil is one of those persons who wears a sign saying " HIT ME". Being a rich loser enables him to retire rather than have to face life as do most people. Basil, they do make pistols for self defence. Though this is not the greatest thing that Collins has written, it is still somewhat interesting. Just don't expect much from Basil himself.

Improves after a slow start

I think Basil is rather better than other reviewers think. I admit that it does have a long, often boring start, & I agree that the idea of "love at 1st sight" is ridiculous & is the cause all Basil's troubles. But the slowness does pick up & the story really becomes interesting. Definitely worth hearing.

I didn't find this disappointing. If you like the Victorian sensationalist type dramas then you should enjoy this. I did even though you can't truly love someone from site. It can develop in time after getting to know someone & clicking. Since Basil didn't get this he suffers as a result.

I have listened to most of Collins' books found here and really enjoyed them. This one was much harder to follow. I felt little sympathy for any of the and was bored much of the time.

After listening to and reading many mystery/romance stories this one was a bit different and surprising.