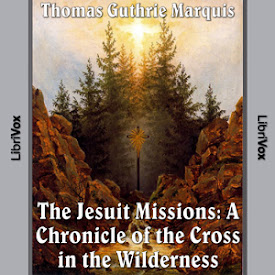 Chronicles of Canada Volume 04 - Jesuit Missions: A Chronicle of the Cross in t…

These little books were designed to cover Canadian history in a scholarly and readable fashion. This volume, as suggested in the title, follows the Jesuit missionaries through North America as they attempt, with little success, to convert the natives of the new world. (Summary by Esther) (3 hr 9 min)

THE JESUITS AT QUEBEC

THE ADVENTURERS OF CANADA

THE RETURN TO HURONIA

THE DISPERSION OF THE HURONS

THE MISSION OF VILLE MARIE

How shameful to praise the missionaries for their terrible actions, to call their deeds heroic. What a work of fantasy, their "bravery" in the face of hardship they themselves created. Does the author really expect us to believe that indigenous peoples were cheering on the colonizers who murdered them and stole their land? What an ungrateful, lying load of bigots. The author repeatedly criticizes the native peoples as "ignorant savages" for thinking the missionaries were already disease, but they literally were! The author has no excuse, germ theory was well established by the time he wrote this.

Book amazing. Readers some good some not so good