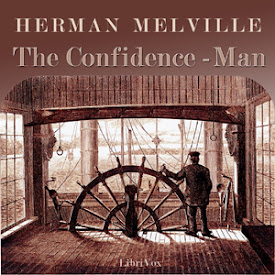 The Confidence-Man: His Masquerade

The Confidence-Man: His Masquerade was the last major novel by Herman Melville, the American writer and author of Moby-Dick. Published on April 1, 1857 (presumably the exact day of the novel's setting), The Confidence-Man was Melville's tenth major work in eleven years. The novel portrays a Canterbury Tales-style group of steamboat passengers whose interlocking stories are told as they travel down the Mississippi River toward New Orleans. The novel is written as cultural satire, allegory, and metaphysical treatise, dealing with themes of sincerity, identity, morality, religiosity, economic materialism, irony, and cynicism. Many critics have placed The Confidence-Man alongside Melville's Moby-Dick and "Bartleby the Scrivener" as a precursor to 20th-century literary preoccupations with nihilism, existentialism, and absurdism. (Introduction by Wikipedia) (10 hr 55 min)

To me, the ddramatic reading enjoyed by another listener felt to me as if the reader was shouting at me. The speech was clear Nd well enunciated, 6, and I hhate to be negative in any way to the very generous readers.

It's each to their own, I guess, with reading styles. I've heard mb before in some of the plays on here and I think he reads this story very well. The story is insane though, no doubt about that!

I think that I am correct in assuming that everyone is a confidence man. It felt as though the reader was on stage reading a play, very enjoyable.

Thank you for a wonderful reading!

I have a rule that when I have read a couple of chapters of a book, I will complete it unless it is shown to morally depraved either by language or prurient subject matter. This book sorely tempted me to break my rule. Not only was it in(s?)ane and utterly disjointed, but the reading could serve as a prime example of that dreaded theatrical term--"emote." The entire experience could well be literature's answer to religion's HAIR SHIRT!