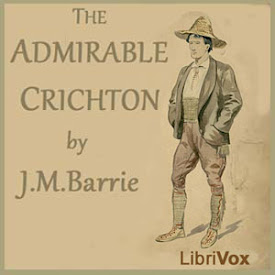 From the author of Peter Pan:

Lord Loam, a British peer, considers class divisions to be artificial. He promotes his views during tea-parties where servants mingle with his aristocratic guests, to the embarrassment of all. Crichton, his butler, particularly disapproves of this.

Loam, his family, a maid, and Crichton are shipwrecked on a deserted tropical island. The resourceful Crichton is the only one of the party with any practical knowledge. Eventually, social roles are reversed, and Crichton becomes the governor. (Intro from Wikipedia & TriciaG)

Jeez TriciaG just reads in a robotic voice, I tried to listen the whole introduction but, frankly it was just a big turn off for me. I know I'm being harsh when I ask: could you please not pronounce every syllable the same way? It just sounds like you don't want to be doing this, like you were forced or something. Librevox has some helpful tips on reading I strongly recommend you look at.

ok story I've said it before and I'll say it again that the woman that narrates the play has the most gawd awful speaking voice. The cadence is overwhelming...I think that maybe her and Peter should get together and read to each other...

Amusing, entertaining, and humorous play! All the voices work well together -- nice performance! Kudos to the entire cast!

I disagree with the previous review. This is a mostly lighthearted play that is well performed by Librivox volunteers.